Thirty-six teenagers gained valuable experience in the working world this summer through the Summer Work Experience Program (SWEP) sponsored by the Center for Student Success and Services Department. 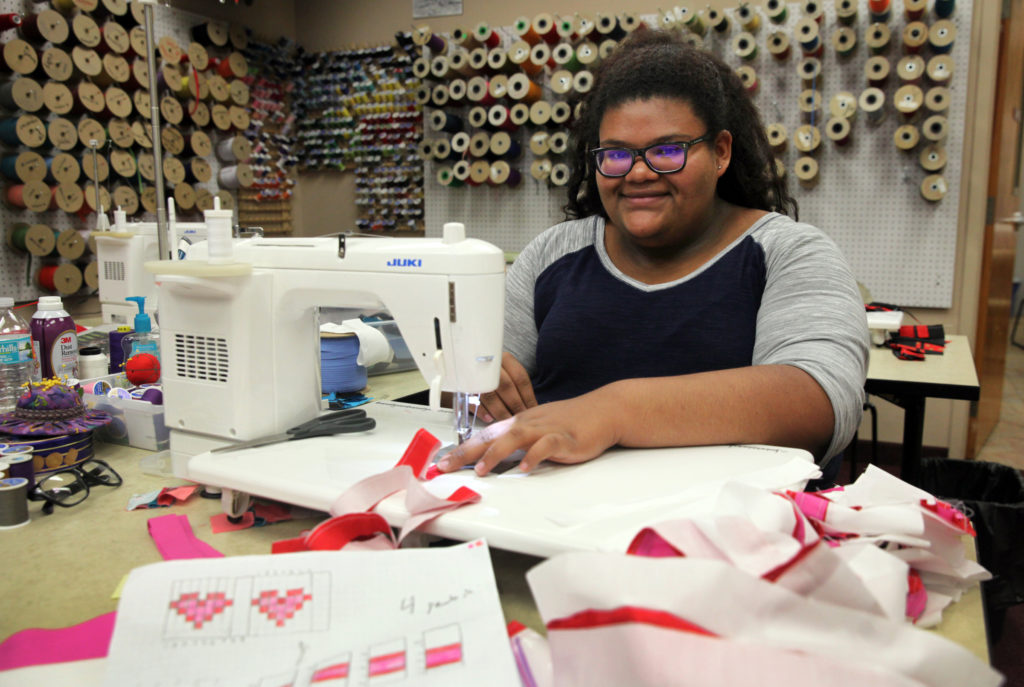 Founded in 2005, the program aims to prepare students for the workforce and expose them to opportunities within the Tribe. The participants chose which department they were interested in and went to work June 12. The program ends Aug. 4. Just like any other Tribal employee, the SWEP students wake up early every day from Monday to Friday, clock in and perform their jobs.

“We want to make them more marketable,” said Kerlande Patterson, Tribal professional development coordinator, who manages the program. “A lot of kids are still trying to figure out what they want to do with their futures and this gives them the chance to work in various departments.”

The experience the students acquired is as diverse as the individuals themselves. Randean Osceola, 14, has always loved reading and writing so she opted to work at the Museum to hone those skills. An aspiring writer, she is using the resources of the Museum archives to research and write an article about significant people in Native American history since 1835, the start of the Seminole Wars.

“There is a lot more here than I thought,” said the Sagemont School ninth-grader. “They preserve a lot of things and I learned that a lot of work goes into putting together the displays.”

Randean spends her time researching and learning more about Seminole history, which is fine with her since she would like to be a journalist or maybe write a book one day.

“It’s not a burden. It’s fun,” she said. “The program gives you the opportunity to do something you choose. It’s pretty much everyone’s dream, to do what you want to do.”

Budding artist Alyssa Osceola, 16, chose to work at THPO where she is using her own gritty style to help illustrate a comic book about Osceola’s life. After she graduates from Florida Virtual School, where she is a junior, Alyssa will attend the Ringling College of Art and Design in Sarasota. The work she did during SWEP will expand her portfolio and the experience will help her to pursue a career in art.

“I’m getting used to working in an office and learning about deadlines, the planning process and publishing,” she said.

Quenton Cypress, a former SWEP student and current THPO employee, mentored Alyssa during her time in SWEP. In his job as community engagement coordinator, Quenton has tried to get more youth and Tribal members involved in the Museum.

“I’ve always wanted to be someone kids look up to and be a role model,” Quenton said. “Kids are watching and will follow, so I try to use that to do good things. We are achieving our goal of more community involvement.”

THPO chief data analyst Juan Cancel supervises the comic book project and acknowledges that comic books can be provocative, gritty and honest. The book is a team effort and will be written by Cancel, Carrie Dilley and Cypress.

“Alyssa is doing historic preservation by telling the history of Osceola in her own way,” Cancel said. “We find different ways of storytelling so why not use a medium like a comic book to preserve and promote history? We want kids to come here and learn in different ways.”

Gherri Osceola, 17, chose to work in the Big Cypress Culture Department to bring her closer to her Seminole roots. She was interested in crafts as a young girl, but hadn’t made anything in a long time.

“I’m reconnecting with it again,” said the Immokalee High School senior. “The ability to work for the Tribe helps me understand how things work inside the Tribe.”

Gherri’s workday included time at the sewing machine, where she made a patchwork pattern of her own design. Her advice to other students for next summer is simple: just do it. Gherri said she benefited from her time in SWEP and is sure other kids will, too.

Lindsey and Lauren Posada worked in the Immokalee Preschool. It was Lindsey’s second summer at the preschool and third in SWEP.

“Working with the kids and helping them learn gives me a feeling of satisfaction,” said Lindsey, 16, an Immokalee High School junior who is also enrolled at Florida SouthWestern State College. “It’s good to know you are helping children in your own community.”

A quick study, Lindsey learned that getting young children used to new things isn’t as simple as it would be for an adult.

“They need encouragement and delayed gratification before they can do what they like,” she said. “The strategy works out well most of the time. The kids are really great and they say the funniest things.”

This was Lauren’s fourth summer in SWEP and second at the preschool, which is perfect for her since she is studying early childhood education at Florida SouthWestern State College in Fort Myers and plans to be a preschool teacher. In fact, working at the preschool influenced Lauren’s choice of major. She knows a lot of patience is necessary for the job and fortunately, she has it in abundance.

“This gives me good experience and will help me with my career in the long run,” she said. “The kids make it enjoyable, they do something different every day so it’s never boring.”
Lauren, who works with the 2-year-old class, gets high praise from teacher Diana Garcia.

“The kids love her and always look for her in the morning,” Garcia said. “She stays with them and engages them; she’s a big help.”

“I like getting work experience and seeing how people do their jobs every day,” said the Okeechobee High School sophomore. “Participating in the program last year made me more open to new experiences.”

Edward admitted waking up early was not fun, but he liked learning what it was like to work and thinks other students should take advantage of the SWEP program.

“You get paid and that’s a good incentive,” he said.

Taking to the field

Moving out of the office, Morgan Yates and Conner Thomas are no strangers to cattle. Each has worked with cows in 4-H and in the pastures, but this was their first year at SWEP. A typical day includes fixing fences and any other tasks that need to be done in the pastures and pens. Two intense weeks were spent helping to ship the calves, a major annual undertaking in Brighton and Big Cypress.

Morgan has worked with her father Bobby Yates in the cattle and range department for a few summers, but this was the first time she earned a paycheck. The Moore Haven High School ninth-grader said she enjoys the camaraderie, stories and jokes told on the job.

“Since I’m getting paid, I am more responsible for getting up and going to the job,” said Conner, a junior at Moore Haven High School. “SWEP is a good opportunity. But if you’re going to work here, you better have tough skin and be willing to work. It’s a lot of fun, but it is work.”

In Hollywood, students received a taste of other careers. SWEP participants Destiny Diaz and Cachalani Hayes Frank learned that careers are not confined to office spaces. The two participants spent the summer learning how to become firefighters with Seminole Fire Rescue. After initially learning how to conduct CPR and about fire behavior, the two progressed to learning about the various trucks used within the department, the ins and outs of the rescue and ambulance and even how to help patients who need heart monitors and ventilation.

In addition, the two learned how to use ropes and tie knots and fire station operations, where they attended training class with professional firefighters. While Destiny favored the ambulance and services acquainted with it, Cachalani leaned toward the “Jaws-of-life,” which is used by rescue personnel to save people who are stuck in vehicles after serious collisions. Despite their varying favoritisms, the girls agreed that working became like “being with family.”

Cachalani, 15, said that the program is a great experience. She chose to work with the fire department at the advice of her older sister, who completed the SWEP program with the department two years ago. At 15 years old, she isn’t sure if she wants to work as a firefighter professionally, but she plans to return to the fire station next summer to gain more experience.

“My favorite part is going on call with the firefighters and seeing how they handle and respond to everything,” she said. “It’s an awesome experience.”

While Cachalani and Destiny were learning how to protect the city, Boryalys Cypress, Elizabeth Frank and Brent Frank spent their summers working as junior counselors with the Hollywood Boys & Girls Club. While the organization has a year-round teen mentoring/volunteer program, SWEP allowed the three students to assist with opening the clubs, daily game and activity preparation, cleaning, youth supervision, serving and cooking meals, escorting youth to and from programming, and mentoring. The program only requires the SWEP participants to work between 25 and 37 hours every week, but Rebecca Bryant, unit manager of BGC, said that they passionately volunteered outside those times.

Bryant explained that Boryalys, Elizabeth and Brent were all previously involved with the clubs, making the passion toward the jobs much stronger. While they have independently grown throughout the program, she has also seen them supporting each other and operating as a team.

“They have all been with us from previous summers and have grown tremendously,” Bryant explained. “As a group, they work pretty well together and have developed a rhythm that allows each of them to showcase their strengths while learning ways to improve their weak areas from each other.”

To challenge the group, Bryant regularly challenges them to work towards personal goals and also toward facilitating their own youth activity during the last week of the program. In doing this, they can demonstrate the new skills gained during the program and receive recognition for their hard work.