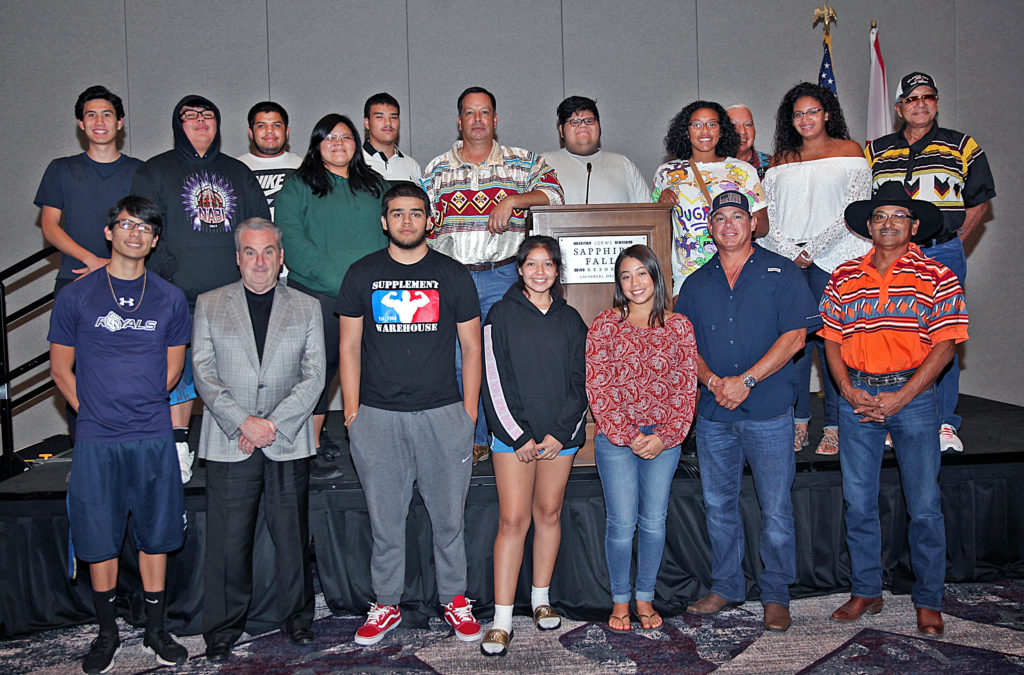 The mission of the program, held at Sapphire Falls Resort, was to provide an overview of what services the Tribe offers its members. About a dozen graduates participated in the program, at which executives from Tribal departments outlined what they do and how the students can take advantage of their services and programs.

“Everything we do is for you, the future of this Tribe,” Chairman Osceola said. “What we are going to show you is what you have the opportunity to be a part of. Regardless of where you go today, tomorrow you will still be a Tribal member. There are so many resources and opportunities to take advantage of.”

The officials each greeted the grads and encouraged them to ask questions.

“That’s what we’re here for,” Rep. Wareham said. “Pull us aside. We have a lot of knowledge.”

President Cypress told the students the Tribe is behind them and will support them in their future educational endeavors. Councilman Osceola urged them to learn and get a depth of knowledge about what the Tribe does because “tomorrow you are going to be doing what we are doing today.”

“Be proud of who you are and where you come from,” Councilman Tiger said. “It’s very competitive out there. The man outside wants to see you come to work every day and on time.”

The departments used PowerPoint presentations to explain their function to the students. Suresh Geer, executive director of finance, gave a tutorial on the Tribe’s budget, including resources that come in and how they are used for the benefit of the Tribe. He told the students the percentage of the Tribe’s income that comes from gaming and used pie charts and other graphics to show how money is spent. 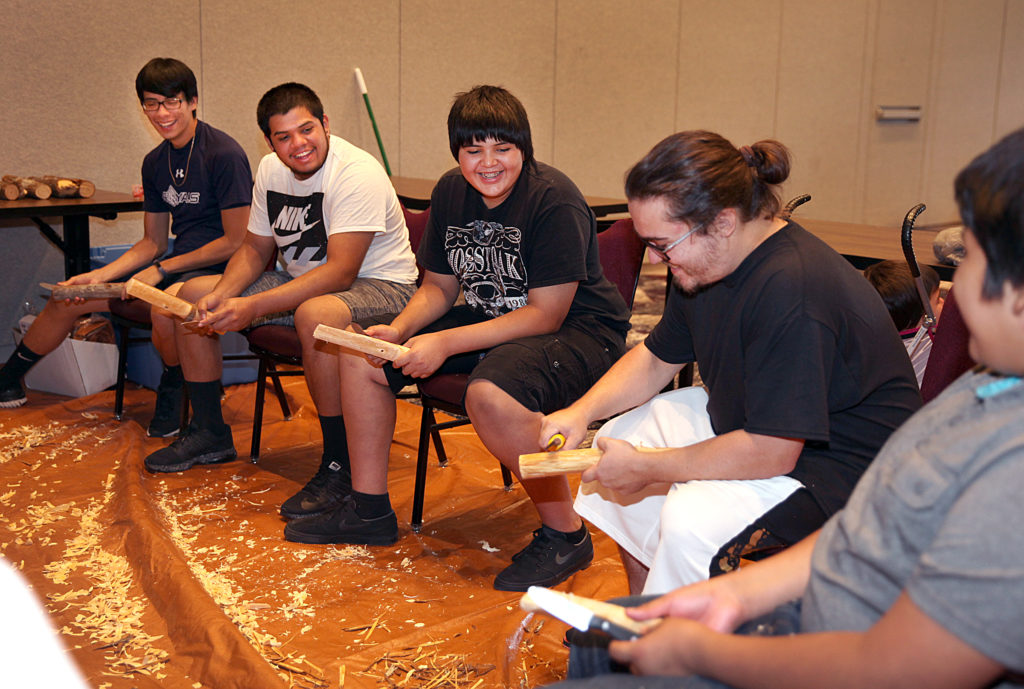 “Assets are the money you put in your pocket, liabilities take that money out of your pocket,” Hahn said. “Remember what you have coming in and don’t spend more than that. People don’t plan to fail, they just fail to plan.”

Health Department representatives described the basics of insurance coverage. Education Director Randall Budde gave advice for post-secondary studies and assured the grads the department will help them navigate the opportunities. Secretary LaVonne Rose described the important functions of her office.

“Please register to vote,” she said. “That’s the key to sovereignty, to elect our own leaders.”

Housing Director Derrick Smith explained good financial management so they can eventually get a home loan. He suggested they save at least 10 percent of their income.

“The more you save, the better you will be set up for the long term,” he said. “And be careful with credit card debt.”

Lewis Gopher spoke about the risk of the Tribe losing the connection to its culture. He told the grads it is everyone’s responsibility to keep the culture alive.

“It makes us who we are,” he said. “We’re the remnants of 300 people that escaped in the 1800s. The blood we have in our veins comes from strong people who fought to survive. We still have teachers who have the knowledge and it’s our job to go learn.”

Gopher told the group that he still seeks out elders. He said they just want to talk and have someone listen to them.

“That’s how we used to learn in a camp setting and it’s still alive today,” he said.

The Culture Department set up in an adjacent ballroom. Fabrics, rick rack, sewing machines, ironing boards and a cutting table made a complete patchwork lesson possible for those who wanted to learn. A large beading table was filled with beads of all sizes and colors.

Michael Jimmie of the Tampa area brought her nine children to the event.

“It’s good for the kids to learn different cultural things as well as to meet kids from other reservations,” she said. “We do this at home, but it’s good to come together with other people.”

Jim Allen, CEO of Seminole Gaming and Chairman of Hard Rock International, gave an update on the Tribe’s gaming operation. He reported that since the Tribe bought Hard Rock International in 2007, the value of the company has more than doubled. There are 226 Hard Rock locations in 75 countries and growing. He called it the greatest family business in the world. 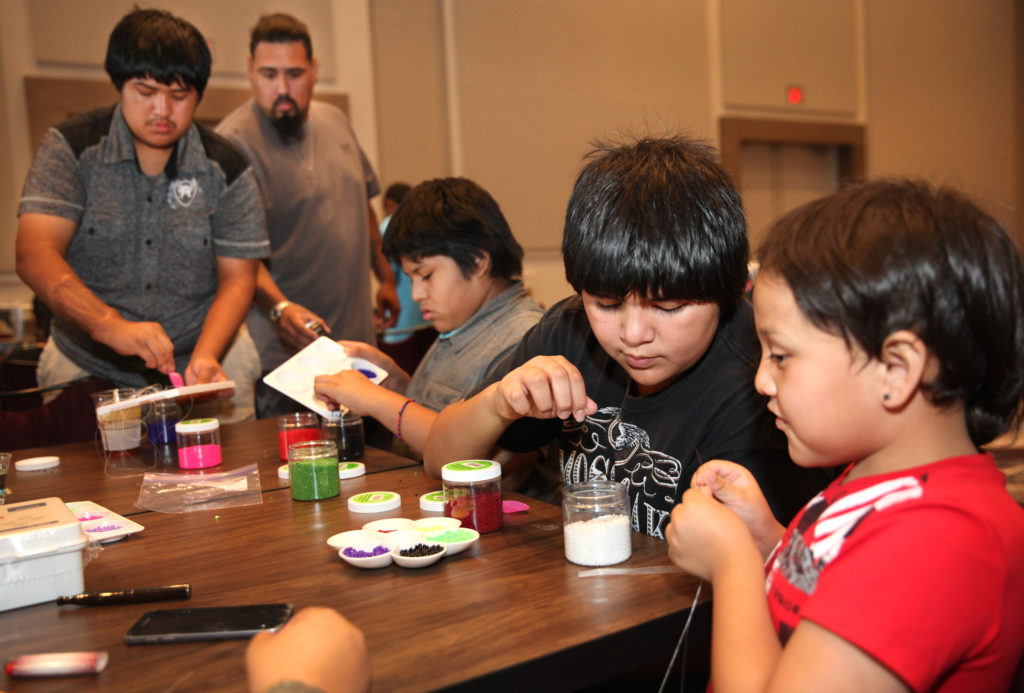 Allen has spent his entire career in the hospitality industry and urged the graduates to seek a work-life balance.

“Find a balance in life or you will always be working,” he said. “You need family, friends and outside interests. Work can be fun if you find something you enjoy, that’s the key. Be serious, but try to have fun.”

Allen’s advice to the grads for a successful career is to be patient, persistent and polite but the most important qualities to have are trustworthiness, honesty and integrity.

At the end of the graduate program presentations, more advice was doled out by Tribal officials.

“Being human means somewhere along the way, you are going to mess up,” said Councilman Bowers. “Deal with it, learn from it and move on. Dare to be different; most people who are become leaders. Seek the truth. Don’t think everything you read on social media is true. Don’t be afraid to ask questions, that’s how we learn. Be fiscally responsible and don’t live beyond your means.”
Graduates said the meeting was beneficial.

“I’m learning stuff to help me through life,” Candace Davis said. “I’m getting all my questions answered, specifically housing information.”

“I learned all about the Tribal branches and the reality of our family business,” Randee Osceola said. “I had no idea how big it really is. I’ve only seen the Immokalee and Hollywood casinos. It makes me want to come to work for the Tribe. I’m grateful they did this for us.”