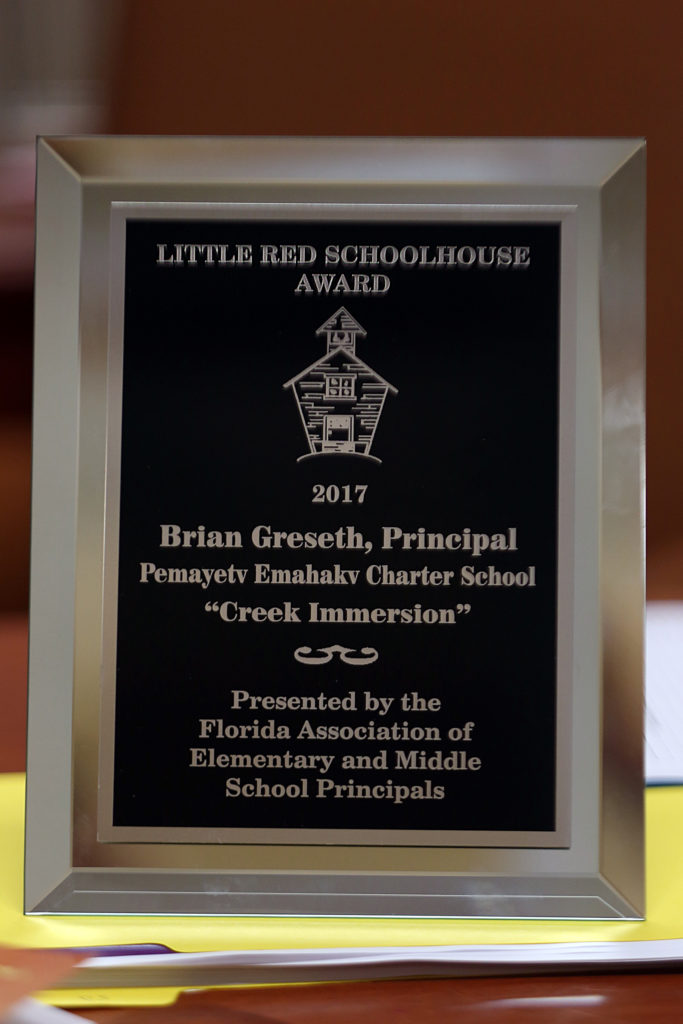 “It’s an exciting award that recognizes the hard work the culture department puts into the immersion program,” Principal Brian Greseth said. “This isn’t something that’s on their radar; they are usually focused on assessments. Ours was the only culturally based entry and it really stood out.”

Greseth submitted a 10-minute video narrated by immersion program manager Marcus Briggs-Cloud with the application. The video began with a provocative opening statement.

“It is estimated that a language dies every 14 days. Ninety percent of the world’s languages are expected to be extinct by the end of this century; the Creek language is no exception.”

There are fewer than 40 fluent Creek speakers in Brighton and the immersion program aims to create more. Briggs-Cloud believes nothing is more effective than a language immersion program for babies to reverse the road to extinction.

“This is the only place on earth someone can go to hear the Creek language exclusively spoken through the entire day,” Briggs-Cloud said in the video.

The video explained the benefit of having six or more fluent speakers in one space, which generates conversation patterns and a passive listening context for students. It also exposes them to unique idioms representative of authentic Creek language and cultural ideology instead of generating a mirror translation of English. This is best represented in humor, as illustrated in the video by a group of four elders talking and laughing together in the classroom.

Founded in 1971, the Little Red Schoolhouse award recognizes schools for their unique and creative way to meet the needs of students. Submissions are judged on originality, implementation, staff and community involvement and longevity during the school year. Programs at six schools were recognized in 2017.

“Creek Immersion by Pemayetv Emahakv Charter School was chosen because of its uniqueness,” said Janet Knott, FAEMSP president. “It is a prestigious award that recognizes outstanding programs that exist within a school that focus on culture, achievement, positive behavior and/or a combination.”

PECS’ mission is to “provide parents, students and the community of Brighton with a school that meets high standards of student academic achievement by providing a rigorous student oriented curriculum, infuse with the Seminole language and culture, in an environment that is safe, nurturing, conducive to learning and designed to preserve Seminole traditions.”

The award-winning immersion program is one crucial way the school works toward achieving its mission.