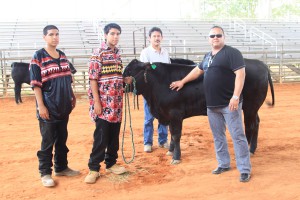 BIG CYPRESS — Inside the Big Cypress Rodeo Arena, Kamani Smith brushed his swine during the Seminole Indian 4-H Show and Sale on March 31.

The 10-year-old Tribal youth, an Okeechobee resident from the Brighton Reservation, spent the last two months raising his pig for the end of the 2011-2012 Seminole Indian 4-H season.

With the 4-H Sale in sight, Smith wanted to make sure his swine, Fugitive, was presented in an acceptable manner for a potential buyer to take notice.

Minutes before it was Smith’s time to sell off his breed, he gave an account of how it all started.

“On the day we got my hog, we were loading her up to my grandmother’s (Tribal member Grace Mary Koontz) house,” Smith said. “When we got there, we were holding up the board to get her in. My aunt wasn’t paying attention to Fugitive, and she dropped the board. We had to chase Fugitive outside the house for an hour.”

Smith said he was happy to see his hog get back to safety, thanks to the efforts of his uncle, Robert Youngblood, who picked Fugitive up by her hind legs and marched her back to the hog pen.

From that point on, Smith went to work, spending many days feeding the swine, giving her water and walking her on a regular basis to prepare for a successful showing at this year’s 4-H Show and Sale.

Smith, whose fifth-class swine placed fourth out of eight contestants in his category at the 4-H Show a day earlier, said his goal for the March 31 sale was to “command her around” the barn and garner a big sale for all his efforts.

“I want to be able to lead her around with my cane,” Smith said.

Smith’s training efforts paid off, as he later took Fugitive to the barn and exercised his skills, leading her around for potential buyers to see. Once Smith’s time around the barn with Fugitive was up – it lasted about five minutes – Hollywood Board Rep. Chris Osceola decided to buy Smith’s hog.

Rep. Osceola, who got his exposure in the Tribe’s 4-H program as a youngster through Big Cypress Tribal senior Moses Jumper Jr., talked about the efforts the 4-Hers put into raising their swine, steers and heifers in preparation for this year’s show.

“Some of these kids had tears in their eyes as they watched their animals walk away,” Rep. Osceola said. “[But] they get rewarded at the end with someone purchasing their animals.”

Meanwhile, Seminole Gaming Chief Executive Officer Jim Allen came out to the show for the first time. He said he was astonished at the sale.

“This is a great day for the Tribe,” said Allen, who brought about 20 Seminole Gaming management employees to the show with him. “We came out here to support the young ones and have some fun at the function. It’s really neat for me to see the true roots of the Tribe taking place.”

Tribal President Tony Sanchez Jr. had his first opportunity to tour the show. As President Sanchez walked through the show barn and out to the arena, he watched the Tribal youth tend to their animals.

“I’m happy just to see the dedication from the kids,” President Sanchez said. “They put forth a real effort in raising some fine animals here. It’s a great thing for them to see the fruits of their labor.”

Immokalee Tribal members and cousins Alphonso Alvarado and Aaron Alvarado were two of the 132 4-H participants, including Big Cypress, Brighton and Immokalee Tribal youth, who saw their efforts pay off.

During the show on March 30, both Alphonso’s first-class steer and Aaron’s third-class steer came in first place out of eight contestants in their respective categories.

Alphonso said he raised his Brangus steer, which weighed 1,044 pounds on weigh-in day on March 29.

“It’s a very nice steer,” Alphonso said. “It felt amazing to accomplish this on my first try. It was a lot of hard work training him.”

Alphonso said he started raising the steer last April at the Immokalee Seminole Ranch, where he spent many days grooming and feeding the male steer.

“He started at about 600 pounds,” Alphonso said. “We gave him corn and weight gainer to gain weight. I trained him to walk, even though he was stubborn with me at times.”

Prior to the show, 4-Hers had to participate in a series of 4-H hog and steer weigh-ins that took place throughout the 2011-2012 season.

“It was very hard to try to get him to a simple weight,” Alphonso said. “I had to train him seven days a week, even on the weekends. It took a whole lot of dedication to get him to where I wanted him to be at.”

Aaron’s mother, Mary Lou Alvarado, from Immokalee, said Aaron made great progress raising his steer. It started out at about 500 pounds when he got him in July 2011 and weighed 1,001 pounds at the show.

“Aaron went out there to the Immokalee Ranch every day to give him show master feed, give him water and walk him around,” Mary Lou said. “Aaron spent a lot of time working on his steer’s showmanship. He had to learn to handle his steer and walk it with a nice cut and finish. I’m very proud of him for what he put into it.”

Aaron said he was happy to see himself and his cousin fare well at the event.

“It was a good competition between us both,” Aaron said. “It’s very nice to get to do something like this. We’ve been working very hard on this, and we’re glad it paid off for us.”