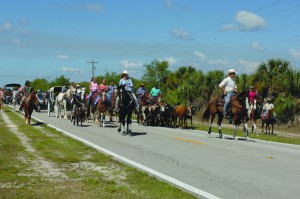 BIG CYPRESS — Cowboys and ranchers mounted their horses and steered more than 200 cows across the Big Cypress Reservation last month on an 8-mile journey for the 16th annual Junior Cypress Cattle Drive.

The March 17 event featured cattle from the Immokalee Reservation’s Seminole Ranch, as well as wagons, buggies, swamp buggies and mules. The Big Cypress Tribal Council and Board offices sponsored the drive.

This year’s honorary trail boss was the late Willie Frank, a Tribal pioneer and grandfather of Big Cypress Board Rep. Joe Frank. Willie was a longtime elected official who developed much of the BC land from what used to be tomato fields and – before that – underwater swamplands.

“There used to be Brahman cattle on the land here,” said former Chairman Mitchell Cypress, nephew of the late Junior Cypress. “We had to fight the government and the diseases that would harm the cattle. But Willie Frank and Junior Cypress found a way to form a cattle program out of it.”

Jumper said that he, Paul Bowers Sr. and Richard Bowers Jr. took their inspiration from the Florida Cattle Drive that took place in the ‘90s, re-enacting the old cattle drives that happened in northern and central Florida years ago.

“We got together one day and said, ‘Hey, we’ve got a great history of cattle and horses,’” Jumper said. “A lot of people don’t understand the significance of the cattle and horses that play a part in our Tribal history and tradition.”

“Raising cattle is one of the first businesses that the Tribe got into,” he said. “Back when I was growing up, my dad, my grandfather and my relatives would go back into these areas here and hunt the cattle.”

“We used to have cattle round-ups on the reservation,” Jumper said. “We went as far as we could to hunt them down.”

For Big Cypress Tribal senior Esther Buster, it was an emotional day.

“I’m glad that y’all all came out,” Buster said, as she tried to fight back tears. “It’s kind of hard for me right now…We dedicate this cattle drive to the one that passed away, Roger Smith from Brighton.” Buster is the daughter of the late Junior Cypress and the late Ida Frank Cypress.

Tribal President Tony Sanchez Jr. recognized the hard work of the event organizers and said he felt honored to attend an event honoring those who have played a significant role with the Seminole Tribe.

Immokalee Board Liaison Dorothy Yzaguirre, who participated in the cattle drive for the first time, was instrumental in helping the Immokalee Seminole Ranch provide steer and cattle for the event.

“It’s quite an experience,” said Liaison Yzaguirre. “I don’t think I’ve ever taken part in anything like this before.”

Carol Cypress, aunt of Rep. Frank, has quite a family history with cattle. Her father, Willie Frank, worked with cows until he was in his 80s, when Rep. Frank took over. Cypress’ sisters, Ethel and Nancy, also helped with the cows, while she preferred cooking for the cowboys.

“One of things [my father] used to talk about was that it was easy to take care of the cattle,” she said. “We had no trouble from the outside world back then, but he told me it was going to get harder to own cows. We’re not in our own little world anymore, so I think it’s harder for us to own cows now.”