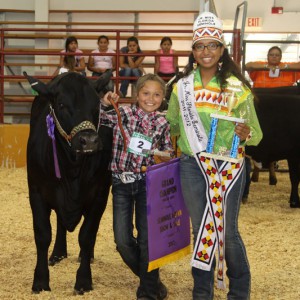 BIG CYPRESS — The Tribal youth showed up and showed out at this year’s 4-H Show and Sale in Big Cypress.

From March 29-31, Tribal youth from Big Cypress, Brighton and Immokalee brought out their heifers, steer and swine at the Junior Cypress Rodeo Arena for the conclusion of the 2011-2012 Seminole 4-H season.

“This is something that’s really important to the Tribe,” said Polly Hayes, Seminole Indian 4-H coordinator for Big Cypress, Brighton and Immokalee. “It teaches the kids a level of responsibility, as well as how to keep records and how to feed their animals.”

For the first time since 2005, the event was held on the Big Cypress Reservation; it was held at the Brighton Reservation’s 4-H Barn for the past six years.

Big Cypress 4-H director Toi Andrews said she was excited about being this year’s host.

“We fought long and hard to have it here in Big Cypress,” she said. “With the help of Councilman Mondo Tiger, we were able to get the Show and Sale here. I’m very pleased that we pulled it off.”

After weighing in their livestock on March 29, Tribal youth got ready for the main event, where a year’s worth of hard work paid off in big dividends.

On March 30, event ringmaster Norman Bowers appeared at the arena’s show barn, assisting each of the 100 4-H Show entrants in the yearling heifer, 2-year-old bred, steer and swine categories of competition.

Hayes said all steers had to weigh at least 1,000 pounds to qualify for the 4-H Show and Sale. With 31 entrants in four classes of steer, the lightest steer weighed in at 1,007 pounds, while the largest one, 1,463 pounds, earned this year’s Grand Champion Steer status for Brighton’s Kiylier Baker, the fourth-class steer winner.

Meanwhile, out of 63 entrants in nine classes of swine, the lightest hog weighed 230 pounds, while the largest hog, coming from Brighton’s Aidan Tommie, weighed 323 pounds in the ninth-class swine category.

“The 4-H youth learn responsibility through the animals,” said Andrews, who participated in the Tribe’s 4-H program as a 7-year-old. “I believe that the discipline and responsibilities they learn from raising their animals are brought into their adult life.”

“The showmanship class is all about how a child handles their animal in the show ring,” Andrews said. “They have to be able to move the animal around the show ring with control and be able to use their show sticks, which is their equipment, in the appropriate way.”

To round out the 4-H Show, 33 additional young Tribal members participated in the Small Animal Club.

The 4-H Sale, which took place on March 31, attracted dozens of Tribal members from multiple reservations, including Hollywood. Many attendees left highly pleased with the 4-Hers’ livestock, having purchased the most animals at the sale in five years, Andrews said.

Hayes said next year’s 4-H Show and Sale will return to Brighton.

“It’s good to have a change of scenery, as many of the kids enjoyed coming to Big Cypress this year,” Hayes said. “It was a good experience for our kids in Brighton to get away from their hometown and experience something different.”