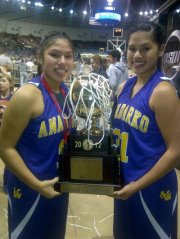 Cara and Kaitlen play for the Lady Warriors, who are ranked No. 2 in their division, with a record of 20-1.

The Lady Warriors defeated three competing teams, including a team ranked No. 4 in the division, to become the champions of the Heart of Oklahoma Tournament.

Currently, they are undefeated in conference play.

Both the boys’ and girls’ teams are made up of 75 percent Native Americans.