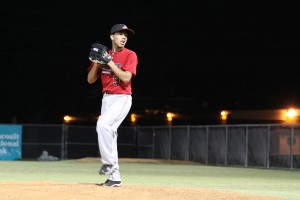 MOORE HAVEN — History has been made once again at Ahfachkee.

Although Ahfachkee lost 11-4 to Moore Haven in four innings of play, it was still a day of celebration for the team, as many firsts were accomplished on the field.

Several of those firsts were made by Ahfachkee starting pitcher O’Shaa’ne Cypress, who was the first teammate at bat and the initial runner to reach a base for the Tribal program, thanks to a hit by pitch in the top of the first inning.

He was also the first to take the mound for Ahfachkee as pitcher in the bottom of the first inning.

Although Moore Haven tagged him for seven runs in the first inning to take a 7-0 lead, he also recorded the program’s first strikeout on the inning’s third out.

Cypress allowed seven runs and recorded two strikeouts in just one inning pitched, gaining a considerable amount of experience in a short time.

Ahfachkee head coach Randall Cleckler said Cypress will grow as a player during the course of the season.

“Before the game, I asked O’Shaa’ne how he felt,” Cleckler said. “He said he had some butterflies. We (the team) told him that it was a good thing and he’s ready for competition. We were all proud of him and all the team’s efforts.”

Ahfachkee senior relief pitcher Stevie Billie, who filled in for Cypress after a bases-loaded walk to start the bottom of the second inning, allowed four runs in that single frame, as Moore Haven took an 11-0 lead to go into the third inning.

In the top of the third inning, the team’s leader smacked in the program’s first RBI single, which allowed teammate Matthew Bluebird to score Ahfachkee’s first run, cutting Moore Haven’s lead to 11-1.

Balentine would go on to score Ahfachkee’s next run, thanks to an RBI single from Dalton Koenes, making it an 11-3 Moore Haven lead.

Ahfachkee’s last run of the inning – and the game – came from an RBI single from Jonah Alvarado, as Koenes found his way home to cut Moore Haven’s lead to 11-4.

Billie, who recorded Ahfachkee’s first hit single and steal in the first inning, got three strikeouts as a relief pitcher – all in the bottom of the third inning.

“I can’t say enough about Stevie Billie,” Cleckler said. “His attitude, abilities and respect for athletics in general is to be commended. Stevie’s work ethic and commitment is second to none…Sometimes, as quiet and reserved as he is, you would never know that competitive spirit he has until you’re on the athletic field with him and see him play.”

The game was called after Ahfachkee’s batters finished up the top of the fourth inning. There was a 10-minute rain delay that held the game up, but it was still a sunny day for the team.

“Even though the first inning was a tough inning, our players understood that they had a lot of baseball to play and it was only one inning,” Cleckler said. “There is still a lot of work to do and we will only get better day to day, with good practices and other opportunities to play games. I think they understand how important practice is because it’s practice that makes you better.”

Assistant coaches Jerry Balentine, Josh Jumper and Cicero Osceola helped prepare the boys for the history-making game and will throughout the season.