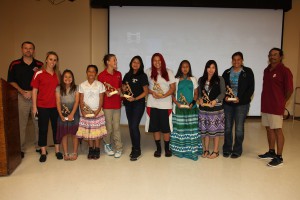 BIG CYPRESS — The Ahfachkee Warriors and Lady Warriors celebrated the end of their second basketball season with an award ceremony on Feb. 27.

Tribal citizens and community members witnessed the crowning of some of Big Cypress Reservation’s best athletes at the ceremony, held at the Community Center.

The event capped off a season of growth for players and coaches.

Ahfachkee School principal Lucy Dafoe said the consistent support from the Big Cypress community played a significant role in the steady improvements made by the boys’ and girls’ basketball programs this season.

“It was very exciting to see our crowds grow bigger and bigger each game,” Dafoe said. “We got to see our kids grow more confident in themselves.”

Big Cypress Tribal Council Rep. Mondo Tiger also noticed the steady improvements in the teams.
“Last year, I wasn’t too sure about our sports program, but look at the room now,” Councilman Tiger said to the athletes’ fans and parents. “You all have come out in full support of our kids. I’m proud of you all for that.”
Shortly after Councilman Tiger’s comments, the crowd watched a video presentation highlighting the best moments of the Ahfachkee Warriors’ and Lady Warriors’ basketball seasons.
The awards presentation followed.

Lady Warriors
“I’m so proud of all the effort, dedication and hard work the girls displayed throughout the season,” Ahfachkee Lady Warriors head coach Kristin Stoots said. “Our final record is a direct reflection of what they all did for the program.”

The Lady Warriors finished with an 11-3 record, scoring 615 total points during the course of 14 games, with an average of 43.9 points per game, she said.

The team averaged 34 rebounds, 18 steals and seven blocks per game.

Stoots said the girls developed sportsmanship, leadership and character on the court, and she looks forward to coaching them far into the future.

The following awards were given out to the Lady Warriors: Most Valuable Player – Reagan WhiteCloud; Defensive Player of the Year – Danni Jae Tommie; Most Improved Player – Michaela Cypress; Warrior Pride Award – Alyssa Osceola.

“It took us a little while, but most of our kids were young and learned the game of basketball over time,” Osceola said. “Our seniors [Stevie Billie, Taylor Pratt and Jonathan Robbins] brought different kinds of leadership to our team, and it helped the younger ones out a lot. I’m proud of all the players for what they achieved this season.”

“It was a pleasure for me to work with these young men,” Osceola said. “With the younger players, we’re going to come back a better team next season. And for our seniors, good luck on the next level.”