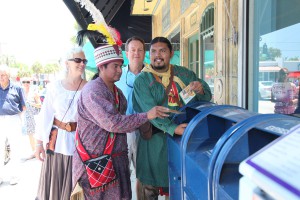 FORT LAUDERDALE — Tribal members Everett Osceola and Pedro Zepeda paddled a traditional Seminole canoe down the New River Canal on May 5. With two mail bags onboard, they made their way toward the Post Office in the same way their ancestors traveled in the early 1900s.

The symbolic sendoff of mail was part of a rally to save the Colee Station Post Office on Las Olas Boulevard, which has been a Fort Lauderdale staple for more than 65 years. Downsizing of the United States Post Offices threatens to close it down along with thousands of others around the country.

“We don’t want to lose what’s valuable in our community,” said Robin Merrill, the organizer of the rally. “[The Post Office] is part of our community. You go in there and people know you by name.”

The rally began at the Stranahan House, a site closely associated with the founding of Fort Lauderdale and its economic and social development. Built as a trading post for settlers and Seminole Indians in 1901 by Frank Stranahan, it evolved into the city’s post office, community center and town hall.

It was this connection with the Seminoles that drew Osceola and Zepeda to the rally.

“Who better to call than the unconquered Seminoles when you’re taking on the U.S. government?” Merrill said. “I needed help.”

During the rally, the two Tribal members transported mail from the Stranahan House to the All Saints Episcopal Church. There, the Fort Lauderdale mounted police, acting as the Pony Express, took the mail from the Seminole messengers and rode it to the Colee Station. Supporters followed on foot behind them.

“Seminoles have always helped the Stranahan House,” Osceola said, adding that Chairman James E. Billie has actively tried to ensure that the historical house doesn’t close down. “We should give something back.”

April Kirk, director of the Stranahan House, said the event offered them a way to share the rich history between the House and the Seminole Tribe.

For Zepeda, the event also offered a way to keep the tradition of canoes alive within the Tribe while supporting a good cause.

“We’re supporting the surrounding communities around the Tribe,” he said.

After delivering the mail, participants headed back to All Saints Church where Zepeda led everyone in a friendship dance. Native Village also set up a tent with alligators and turtles for spectators to acquire another insight into Seminole culture.

A decision is expected to have been made by mid-May as to whether they will close the Post Office, which ranked in $597,000 of profit last year alone and is a walkable, convenient location for downtown residents, tourists and local businesses.