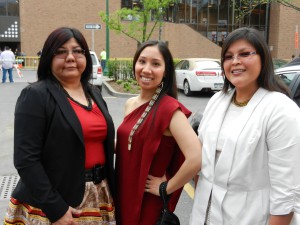 At the premiere, SMP Broadcasting Manager Sunshine Frank and Seminole Tribune Editor in Chief Camellia Osceola spoke with the film’s producers and actors to find out what it meant to them to spotlight Native America on such a large scale.

“We enjoyed going to the premiere and seeing a united Native America,” Frank said. “I was very happy to see that we are being represented in the motion picture world in a positive, feel-good light and that a Native Tribe like the Onondaga Nation took the risk and produced a film to raise awareness and teach Native culture to mainstream America.”

The film tells the story of mixed-blood Native American Joe Logan who is tasked by his father with coaching the reservation’s high school lacrosse team.

In the movie, Logan (played by Brandon Routh of Superman Returns) inspires the Native American boys and teaches them the true meaning of Tribal pride. Ignited by their heritage and believing in their new-found potential, the coach and team climb an uphill battle to the state championship finals.

The game of lacrosse originated with the Six Nations Tribes of the Iroquois Confederacy: the Oneida, Mohawk, Onondaga, Cayuga, Seneca and Tuscarora. Crooked Arrows will be the first film ever to showcase the game of these Tribes.

Neal Powless, one of the film’s co-producers and a member of the Eel Clan of the Onondaga Nation, said he wanted the film to showcase Native America’s role in the creation of lacrosse. Powless was a three-time All-American lacrosse player at Nazareth College before being drafted by the Rochester Knighthawks, leading to a seven-year career in the National Lacrosse League.

“Just like any good movie, it takes you on a journey,” he said. “Crooked Arrows takes you to the rez and then brings you back home.”

The film also features popular Native American actor Gil Birmingham, who enjoyed having the opportunity to play in a Native film.

“We are very proud that we have the Native storyline,” he said. “We hope that it’s entertaining as well as educational and that the youth connect with the greatness of the Creator, which is where the game came from.”

Osceola said she enjoyed the experience.

“I think it’s always a good thing to support our fellow Native Americans and to educate the non-native world,” she said.