BIG CYPRESS — After years in Brighton, the annual Seminole 4-H show and sale shifted to the Junior Cypress Rodeo Arena in Big Cypress on March 23 and 24.

An enthusiastic group of 62 4-H’ers vied for awards and accolades as friends and family cheered them on from outside the ring and stands.

Before the show, the kids washed and groomed their animals onsite to get them show-ready. Hoses, soap, clippers, brushes and other tools were used to bring out their best attributes. Grooming was not exactly like putting lipstick on a pig, but it did make those pigs, heifers and steers look as good as possible for the judges.

As they primped their animals, the 4-H’ers had time to reflect on their time raising them.

“He likes to play and eat my hair; he thinks it’s hay,” said Caniah Billie, 13, of Immokalee. “I feel great about it, but I don’t want to let him go.”

It was Caniah’s third year raising a steer and although selling her steer was not something she liked to think about, she knew it was something she would do.

Jayton Baker, of Brighton, said the hardest part of raising his first steer was getting up in the morning to feed it before going to school.

The 4-H program teaches youth to be responsible and care for the animals but it also teaches them about the business of raising livestock. The youth tracked every cent they spent on food, supplies and veterinarian costs and kept it in a log. They kept whatever profit was made from the sale.

“This steer is calmer and was easier to train than the one I had last year,” said Priscilla Alvarado, 14, of Immokalee. “I liked watching him grow and it will be sad to sell him, but I learned a lot about responsibility and will be more responsible from now on.”

At age 11, Jalee Wilcox is already a 4-H veteran. Over the years she’s had hogs and steers. This year she raised a steer and a heifer.

“Having both was fun because when one was being hard, I could play with the other one,” said Jalee, of Big Cypress. “They like being together so it was hard to get them used to walking in the ring alone.”

Jalee figured out an effective reward system for the steer; he enjoyed being scratched, so she used that as a reward whenever he was cooperative. Her work paid off. Jalee’s heifer won Reserve Grand Champion and she earned the Intermediate Showmanship award for steer.

First up during the show were the youngest competitors. Beginning at age 5, children may join the 4-H Cloverbuds and learn to care for small animals such as hamsters, guinea pigs, rabbits and chickens. The group proudly filed into the show ring with their animals. By age 8, the Cloverbuds are old enough to raise a hog and at 10 they are responsible enough for a steer or heifer.

While the 4H-ers showed their heifers and steers in the ring, judge Allen Gahler pointed out positive attributes of the animals and explained why the winner in each class was chosen.

“There is a tremendous amount of good in this heifer, in terms of a breeding female,” Gahler said about Jalee’s heifer.

Big Cypress’s Brianna Bowers’ Grand Champion heifer was an obvious choice to Gahler, who said, “She has the most natural muscle shape. This is just a nicely made female from end to end.”

When the steers entered the ring, Gahler said, “These are the ones we will put on the kitchen table. They need enough fat and muscle and these have that very well. They will all make tremendous carcasses.”

After the show, the Big Cypress sisters reflected on the event and their relationship. It was the first time Canaan, 13, had bested her older sister.

The steers came from family herds; Canaan’s from uncle Naha Jumper’s and Ahnie’s from her father Josh’s. The sisters have an easy camaraderie.

“This brings us closer together,” Canaan said.

“Every dog has his day and today was Canaan’s,” Ahnie said.

“Yeah, and every other day is yours,” Canaan retorted.

The swine show featured 34 4-H’ers who proudly guided their hogs in the ring for judge Doug Albright, who looked for structure, power and attractiveness.

“All these animals will end up in the food chain,” Albright said. “We look for market readiness, balance and correctness.”

Abbiegale Green raised a hog for the first time this year.

“It was hard and I’d get mad sometimes, but he made me smile,” said Abbiegale, 9. “He’d go crazy whenever he saw me.” 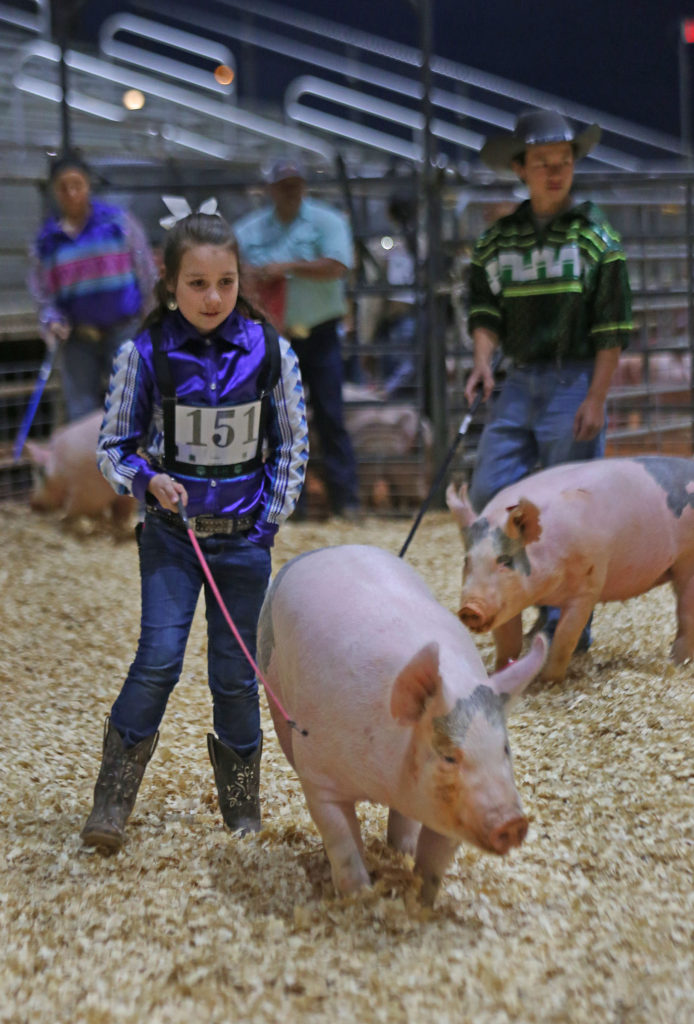 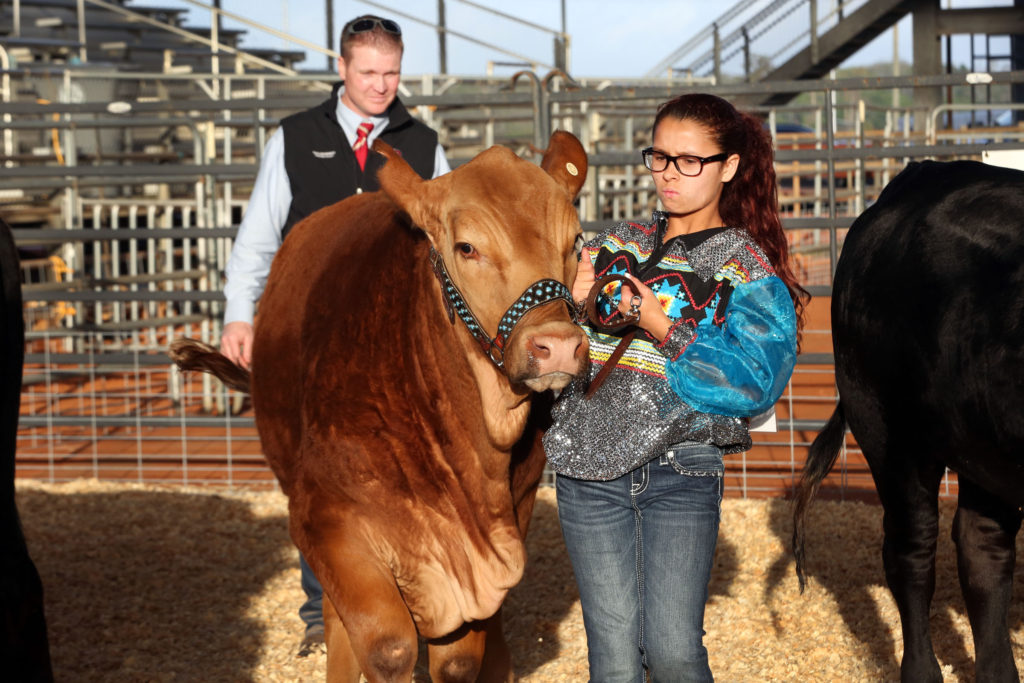 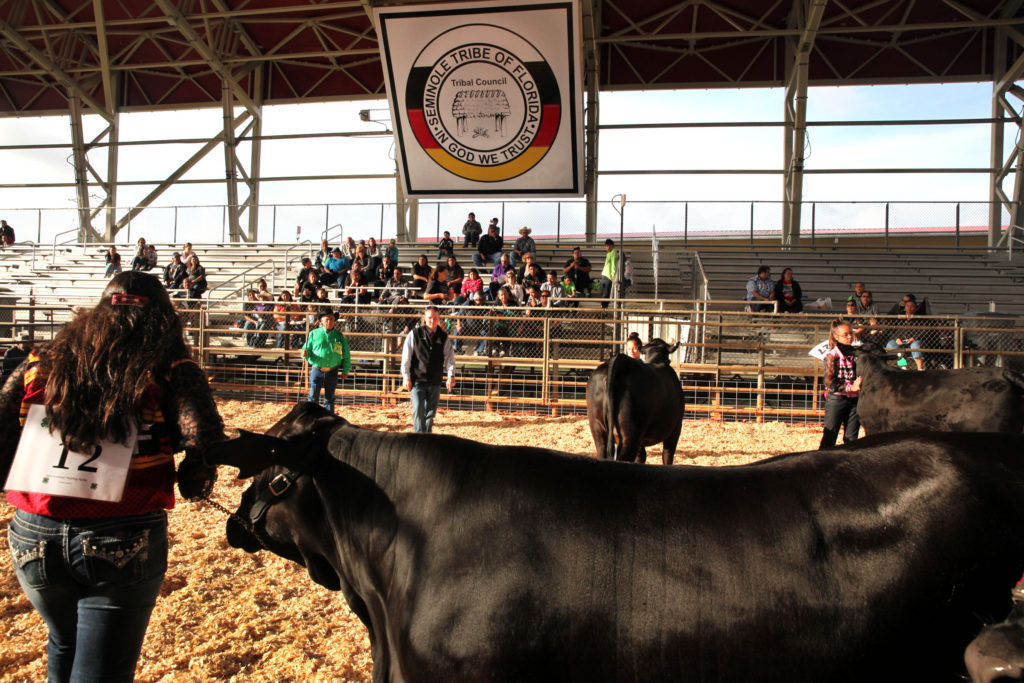