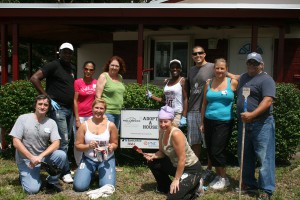 HOLLWOOD — On April 19, eight Seminole Hard Rock Hotel & Casino employees pulled into Nancy Lacter’s driveway, ready to fulfill one of her dreams. Moments later, Lacter, of Hollywood, opened her front door with tears in her eyes.

Lacter, a single mother, had been on the waiting list for the City of Hollywood’s Adopt-A-House project for more than two years.

Adopt-A-House is a housing renovation project where volunteers do practical and feasible restorations on one-story, single-family homes such as painting or cleaning up the yard. The City of Hollywood’s Volunteer Hollywood program is flooded with applications for the project.

“I saw the ad in a newspaper and applied,” Lacter said. “I didn’t hear anything back, so I kept calling and calling, and now it is finally happening.”

The Hard Rock reached out to their employees in their monthly newsletter asking for volunteers for the community service project.

“We try to do a couple of community projects a month,” director of hotel operations Chris Cano said. “We have also participated in beach cleanups. It is just a good way for the Seminole Tribe to give back and to help their neighbors and community.”

Dawn Miller, employee relations coordinator for the Hard Rock, helped organize the volunteers and contacted the City of Hollywood to get the ball moving. She said it shows people that the Seminole Tribe of Florida are more than just casinos; they are caring individuals.

After much waiting, Lacter received the call from the City of Hollywood’s Department of Community & Economic Development saying she had been selected for the renovation project. An employee visited Lacter so she could pick out paint colors and get ready for the big day. However, the biggest surprise didn’t happen until she met her crew.

“I had no idea employees from the Hard Rock were the ones coming,” she said. “I was so excited to find out. I love the Hard Rock. I go there all the time. The Seminole Tribe are just great people.”

Cano and Miller, along with their coworkers, spent the day painting the exterior of Lacter’s house.

Lacter thanked the Seminole Tribe and the Seminole Hard Rock Hotel & Casino employees for their generosity and said she is proud of her house.

“I can’t thank them enough; it really means a lot,” she said. “They have given me hope.”