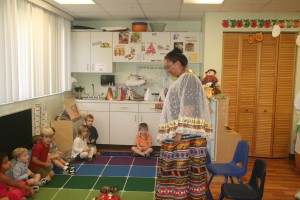 IMMOKALEE — It began nearly a hundred years ago as an effort to gain one day of national recognition for Native Americans. After all, the First Americans made significant contributions to the establishment and growth of the United States. Now, Native American Heritage is celebrated all month every November.

The celebration started in 1912 when Seneca Indian Arthur Parker, the director of the Rochester Museum of Arts and Sciences in Rochester, N. Y., persuaded the Boy Scouts of America to set aside a day for Native Americans. Three years later, the Congress of the American Indian Association met in Lawrence, Kan., approved a plan to celebrate American Indian Day and made the first formal appeal to recognize Indians as citizens.

Senate Resolution 145 of the 105th Congress of the United States of America acknowledged that Tribal governments developed the fundamental principles of freedom of speech and separation of the powers that form the foundation of the U. S. Government. Native Americans traditionally exhibit respect for our natural resources and serve with valor in the military. They have made important contributions in many fields, including agriculture, medicine, music, language, art, athletics, education and leadership.

Last year, to pay tribute to the rich ancestry and traditions of Native Americans, the Diane Yzaguirre Memorial Library and Immokalee Culture Department joined forces to offer a series of educational programs throughout the month of November.

On Nov. 2, the library sponsored an afternoon of cultural awareness when Gordon “Ollie” Wareham entertained the youngsters with storytelling and the animated expression of Seminole legends. With voice changes and graphic interpretations, he assumed the role of multiple characters and captivated his audience. Picking up his flute, he filled the room with the haunting notes of past generations and helped his listeners envision their heritage. 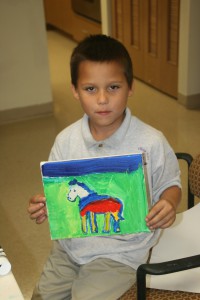 On Nov. 7, artist Elgin Jumper visited the library to teach painting on canvas. He assisted the Immokalee seniors in the creation of a landscape sunset in the early part of the day.

“I am always rewarded when I spend time with our elders,” Jumper said. “They teach me more than I could ever hope to teach them. As an oral culture, we rely upon their memories to pass on the important lessons of our ancestors.”
During an afterschool session, Jumper introduced more than a dozen young artists to the Seminole Horse.

“Comprised of the Tribal colors of red, yellow, black and white on a landscape background, the Seminole Horse is designed to carry art and poetry into the Seminole future,” Jumper said. “It is my goal to create a chat book focused on the artwork and poetry of our youth.”

Every month is Native American Month in the cultural departments on the reservations, where a concentrated effort is made year-round to teach, inspire and encourage the Seminole culture and heritage. However, this November brought in numerous requests for presentations off the reservation in both public and private schools in Collier County.

Immokalee culture coordinator Geraldine Osceola prepared a curriculum suitable for presentation to a variety of age groups that brought a favorable response in each of the classrooms she visited. For instance, while talking to preschoolers at the Bear’s Den Childcare Center, she passed around beadwork, a sweet grass basket, a doll, a patch work example and a miniature chickee while talking about language, clans, animals and camp life. At the conclusion, she gave each student a piece of a totem pole to decorate and assemble.

On Nov. 29, about 35 second graders at the North Naples United Methodist School learned about the Seminole people and their way of life. In addition to the Seminole crafts, they viewed archive photographs, a hand-crank sewing machine, whole and ground corn, dried deer meat, lapoli, sugarcane, pumpkin, squash, a stalk of bananas and sweet potatoes. A brief historical presentation included the Three Seminole Wars, life in the Everglades, travel by dugout and on foot, the trading posts, hunting and fishing. 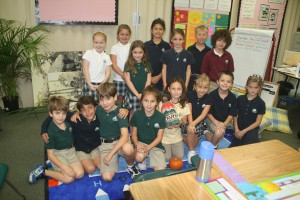 “I find that the children are very inquisitive and ask numerous questions,” Osceola said. “The response from the teachers is overwhelmingly positive.”

Librarian Jamie Yzaguirre said, “Our library has a vast assortment of reference material of a Native American nature. The learning materials target all age groups and we are always ready to assist our readers in locating the items that would best suit their needs and encourage them to learn about their past as they prepare for the future.”