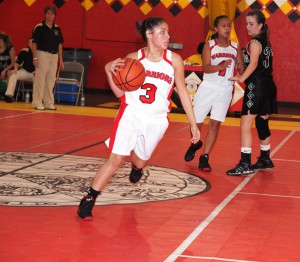 When both the boys and girls teams play, there’s excitement in the air, particularly when it comes to the additions made in the program’s second season of operation.

Beyond that, the boys team scored their first-ever win in history – albeit by a forfeit from Charter of Boynton Beach on Dec. 5. Meanwhile, the girls team is starting its season strong, as the Lady Warriors have managed to earn a 4-0 record (as of their Dec. 6 home game vs. King’s Academy-Clewiston) with relative ease.

“It’s not the win that we wanted, but we’ll take it,” Ahfachkee Warriors senior Taylor Pratt said. “I’m just excited that this season is looking up more than last year.”

Big Cypress Tribal Council Rep. Mondo Tiger opened up on how this season has turned out for the Tribal athletic program thus far.

Despite that, this year’s collective – which includes eight new players – has shined brightly in their first four games in the key area of teamwork.

In addition to that, Whitecloud, arguably the team’s best overall player thus far, has made some big strides in her shooting abilities and her overall leadership skills – a key component to the her team’s relatively fast start.

Whitecloud, who has averaged a team high of 25.3 points over four games, has been the team’s go-to player to set the tempo.

Whitecloud has helped speed the game up with her hustle and drive, particularly on the defensive end, where she leads the team with an impressive average of 8.9 steals per game at this point in the season.

“Reagan has definitely stepped up this year as a leader on and off the court,” Ahfachkee Lady Warriors second-year head coach Kristin Stoots said. “She has great ball-handling skills and great vision on the court. She’s very quick and a lot of her lay-ups come from the fast-break offense that we run. I’m really proud of her efforts and growth as a player from last year to this year.”

Whitecloud’s leadership has had a positive effect on her teammates, including junior and new addition Danni Jae Tommie. A transfer from Glades Day School in Belle Glade, Fla., Tommie has fit in nicely with the team, as evidenced by her stellar averages of 14.5 rebounds, 11.0 points, 3.3 steals, 2.5 blocks and 2.5 assists per game – perhaps the team’s most well-rounded player at this juncture.

“Danni Jae has been phenomenal on the boards so far this season,” Stoots said. “She’s put up a whole lot of points for us as well. She’s been a key addition to our team and it’s helped us a lot.”

Meanwhile, Cypress has been a pleasant surprise to the team’s early success, as she has averaged a total of 11.5 points, 6.0 steals, 3.5 blocks, 3.0 assists and 2.5 rebounds per game. Cypress leads her team in blocks per game – including a season- and team-high 11 blocks in Ahfachkee’s 49-12 win over King’s Academy-Clewiston on Dec. 6 – and in 3-pointers made, with 8 total as of four games played.

“I’ve seen so much growth in Michaela,” Stoots said. “She is one of our best shooters on the team. I’m really proud of her in how she’s stepped up.”

The team faced a challenge when last year’s stars left. Terri Baker, 2010-2011 MVP, transferred to play for the Clewiston Lady Tigers this season and her sister, Tia Osborne, graduated from the Ahfachkee School last spring. But even without them, this year’s squad may have a chance at an undefeated season.

A lot of that has to do with teamwork and sportsmanship – two things that Stoots has worked really hard with her players to embrace.

“I have four sixth graders (Eyanna Billie, Dayra Koenes, Alyssa Osceola and Trinity Williams) on the team,” Stoots said. “I’m looking forward to their growth over the next few seasons. The talent is spread out a little bit more, and they all definitely come together for a group effort on both sides of the ball.”

Stoots said she spent some time in efforts to bridge the age gap between the older and younger players, with the team’s 11 players ranging from 10 to 17 years old.

“That’s a huge difference in terms of maturity,” Stoots said. “So what we did was match the older players up with the younger ones. It’s like a big sister/little sister thing we have here. The older players are responsible for encouraging the younger ones on and off the court. They’ll encourage the younger players by actions such as writing cards to them and even giving each of them a bottle of Gatorade before game. It’s a team-building concept that has worked out really well.”

And all that has helped the Lady Warriors win their first four games with relative ease, as evidence by their blowouts against Hialeah Educational Academy with a score of 45-18, St. John Neumann-Naples 61-40, LaBelle 50-39 and King’s Academy-Clewiston 49-12.
The Lady Warriors finished the first half of their season with road games against Moore Haven and Donahue Academy-Ave Maria.

The Lady Warriors will finish the second half of the 2011-2012 season with five of seven home games against the following teams: King’s Academy-Clewiston on Jan. 9, Cape Coral Christian on Jan. 10, LaBelle on Jan. 17, their homecoming game against Moore Haven on Jan. 19 and their season finale against Donahue Academy on Jan. 27.

The team’s final two road games are against St. John Neumann-Naples on Jan. 6 and Hialeah Educational Academy-Hialeah on Jan. 12.

“We’ve been trying to focus on bringing them all together as one program, one family, one team,” Stoots said. “It has been a challenge at times, but I think it’s really showing on the court. I’m really proud of them for that.”

The new addition of players like Ahfachkee senior Jonathan Robbins has provided a much-welcome spark to a team that suited just six players last season.

Under the coaching leadership of Big Cypress Tribal citizens Cicero Osceola, first-year head coach, and Josh Jumper first-year assistant coach, the team’s enthusiasm suddenly grew from last year – and it has truly shown on the court.

Though the boys lost their first three games of the season – 39-69 to Cape Coral Christian in the season opener, 32-98 to Immokalee in the home opener and 25-52 to LaBelle on the road – there seems to be a feeling that they’ll likely win at least a few games this season.

Robbins has almost single-handedly carried his team through the season’s first three games – he has averaged a team-high 20.3 points per game. However, statistics don’t tell the whole story as to how the boys are expected to grow as the season rolls along.
There are now 10 players on this year’s team – a positive thing because not all of them will have to be on the court for the full 32 minutes of regulation, giving the players much-welcomed rest from time to time.

“We’re going through growing pains right now,” Osceola said. “They’re learning, but we haven’t caught up as a team yet…But as you see, they have a lot of heart and they don’t give up. They’ll get it together and play pretty decent in a few games.”
Osceola considers this season as a learning curve for his boys.

“When you learn how to play against tougher teams, it boosts the confidence of our kids,” Osceola said. “Even though Immokalee beat us bad, they didn’t give up. In the second half, it always seems as if we play tougher.”

Osceola said his team could have had a chance to win their road game against LaBelle, fighting back from a seemingly insurmountable halftime deficit to the Cowboys.
“We played nowhere near where we should have,” Osceola said. “Keep in mind that we opened the season up with three games in three days. Our kids got to get mentally sound to the point that they won’t get tired, but it’s going to take some time.”
This year’s team consists of: Christian Anderson, Jonah Alvarado, Roderick Bert, Corbin Billie, Matthew Bluebird, Quenton Cypress, Nathaniel Jim, Pratt, Robbins and Uriah Waggerby.
The boys record is 1-3 as of Dec. 5. They played on the road against Moore Haven and Donahue Academy-Ave Maria to finish out the first half of their season.

They will complete their second season with seven of eight games at home: against Cape Coral Christian on Jan. 10, Charter of Boynton Beach on Jan. 13, LaBelle on Jan. 17, Moore Haven on Jan. 19 for their homecoming game, Heartland Christian on Jan. 20, American Prep Academy on Jan. 26 and Donahue Academy Jan. 27 for the season finale.

The boys’ final road game of the season is on Jan. 9 against Heartland Christian in Sebring.

Osceola said he expects to see a lot of improvement as far as team play goes.

If the boys score in the first half of games as much as – or even more than – they do in the second half, expect to see some wins on their final record.

“I’ll wait until the end,” Osceola said. “We’re not worried about who we’re playing. It’s all about playing with defense, fundamentals and heart. Just watch; you’ll see a lot of improvement in our boys.”