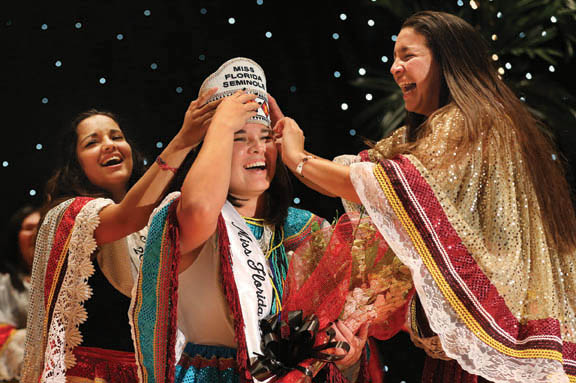 Destiny’s crowning was an emotional family affair as her younger sister and outgoing Miss Florida Seminole Brianna Nunez graced her with the coveted crown and sash.

“We all did well in practice all week; I was very surprised to win,” said Destiny, 20, who last competed in a pageant when she ran for Little Miss Brighton. “I hope to represent my Tribe to the best of my ability. We are more than the Hard Rock; we are the Unconquered Seminoles and I hope to let people know that.”

Destiny, an education major in her junior year at the University of Central Florida in Orlando, also won the essay and talent competitions. For her talent, Destiny told a story about a man and his son who discovered a friendly village had been massacred by the Army, which in turn helped them escape the same fate. She chose the story to demonstrate the Tribe’s rich history, which Destiny fears is becoming lost among today’s youth.

“They don’t know why we are the Unconquered,” she said. “It showed that yes, we are a strong people today, but a lot of people had to give up their lives to get us to that point.”

Skyla, competing in her first pageant, admitted that while nerves surfaced, she still felt well-prepared before going onstage.

“I didn’t expect to win,” said Skyla, 16, a junior at American Heritage School in Plantation. “But I’m very happy and proud to be Jr. Miss Seminole.”

Skyla plays basketball on her school’s varsity team and on a travel team. Her mother, Francine Osceola, said her daughter did great, but the pageant scene is much different than the sports arena.

Skyla learned to sew from her mother. The training served her well, as she won the talent contest with an apron and sundress she fashioned for her cousin. She was also awarded the Miss Congeniality trophy.

The theme of the Princess Pageant, held at Tribe Headquarters in Hollywood, was “She is Seminole … Beautiful and Proud.” Pageant Committee Chairwoman Wanda Bowers said the pageant was anyone’s to win.

“They are doing really great,” she said. “They have all been here before except for two. I couldn’t pick a winner.”

The two rookies, Destiny and Skyla, took the crowns.

During the banquet July 24 at the Seminole Hard Rock Hotel & Casino Hollywood ballrooms, Bowers recognized the hardworking women who have served on the Princess Committee over the years. Three were singled out: Dorothy Tommie, Bobbie Lou Billie and Geneva Shore.

“These ladies devoted their time and energy to make sure there was a pageant,” Bowers said.

This year’s pageant was dedicated to the late Lorene Bowers Gopher, Miss Florida Seminole 1963, who worked to preserve the Tribe’s culture and language. After a video tribute, her son Lewis Gopher spoke about his mother.

“She never worked for the reward,” Gopher said. “She did it because that’s what she loved to do. She saw her children graduate from high school and her granddaughter graduate from Florida State University. She loved her family, culture and education. Before she left us, she finished her dictionary in Creek. That was her life’s work and it’s going to carry on.”

During the talent portion of the pageant, the contestants also demonstrated that the Tribe’s culture lives on through their skills in patchwork, cooking, beading, poetry and storytelling. The traditional clothing presentation and impromptu questions preceded emotional farewell speeches by outgoing Miss Seminole Brianna Nunez and outgoing Jr. Miss Cheyenne Nunez.

“It’s been a fun year,” Cheyenne said through tears. “To the next Jr. Miss, just enjoy it. The year will go so fast. It’s been an honor to represent my Tribe. I will cherish this forever.”

Brianna thanked her siblings for sharing their mother, Deanna, who traveled with her all year, and her grandmother Alice Sweat, who taught her “everything I know.”

“You are here to be an ambassador of your Tribe,” she said. “Once you are crowned, you will understand the job, but I never felt like it was a job; it was so much fun.”

After the pageant ended, “backstage grandma” Connie Gowen, the first Miss Florida Seminole in 1957, and Skyla shared a long embrace. Skyla is the granddaughter of the late Priscilla Sayen, Miss Florida Seminole 1964 and Gowen’s close friend. Then the stage filled up with the princesses’ family and friends for photos.

“I want to thank these ladies for stepping up,” Big Cypress Board Rep. Joe Frank said during the banquet. “It takes a lot of courage, and courage is the first step of leadership. Be ready, it’s a long year of work.”