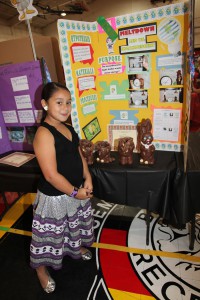 BIG CYPRESS — Nena Waggerby spent hours upon hours working on her exhibit entitled Don’t Be Blue If Your Color Fades, and her hard work paid off.

It turned out to be the Ahfachkee School’s top-rated display at the fourth annual Science Fair on Nov. 15 inside the Herman L. Osceola Gymnasium. The Tribal freshman registered a score of 94.3 out of a possible 100 points.

A total of 117 students from the Ahfachkee School, grades Pre-K through 12, participated in this year’s Science Fair.

“It was really nice to see many of the parents and teachers involved with the whole process,” said Ahfachkee science teacher Timothy Blount.

Waggerby was one of eight students who qualified for the National American Indian Science & Engineering Fair (NAISEF) to be held wMarch 22-24 in Albuquerque, N.M. She was excited to have her work recognized, and so was her mother, Amanda Cypress.

Cypress said, “It’s a good project and I’m proud of Nena for what she put out. I hope she can win the nationals next spring.”

Waggerby said that her six-day-long experiment tested how color fades on cloth after it’s washed and dried. She used blueberry dye, blueberry juice, salt and vinegar on the cloths. One cloth, which she didn’t wash, served as the control.

“It feels amazing to win this,” Cypress said. “I feel like I could do more work and get through the seventh grade. Mrs. (Vicki) Pratt and Mr. (Timothy) Blount are excellent teachers. Without them, I would have never gotten through the experiment.”

Ahfachkee junior Danni Jae Tommie, who also qualified for the 2012 NAISEF competition, worked on an experiment called In Full Bloom.

“I used white carnation flowers and food coloring to see how much the flowers would change in color,” Tommie said. “It took three days for the color to change from white to yellow, red, green and blue.”

At the Science Fair’s culture exhibit, Ahfachkee sixth-grader Alyssa Osceola could be seen matching a variety of fruits and vegetables with the vines they originated from. It was one of the most popular visuals out of the 127 entries.

Ahfachkee language and culture instructor Mary Jene Koenes explained how the standout exhibit came together. She also discussed gardening processes, such as how a sweet potato grows.

“The sweet potato is a prolific grower because it does well by itself,” Koenes said. “If you don’t keep its vines under control, then it will take over your whole garden and yard.”

Other plants at the exhibit included: tomatoes, carrots, peanuts, pumpkins, peppers, aloe, figs, bananas, guavas, papayas, avocados and cotton. All the plants had healthy growth because of the soil’s composition.

“We take dead leaves and scrap vegetables to make our soil,” Koenes said. “We also take in earthworms and put all of it together in compost. The earthworms do all the work and when it’s finished, it turns into very rich soil.”

The students weren’t the only ones who took home a lesson from the Science Fair.

Science teacher Blount said, “Personally, I learned that students can become team players and logical thinkers. All of the students learned more information about their projects and were proactively involved in organizing and displaying facts. The students were more apt to show various levels of scientific ability to complete challenging topics.”