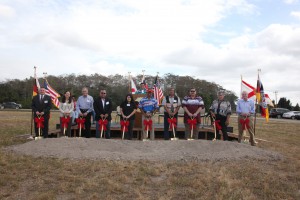 BIG CYPRESS — Snake Road has a shape so distinctive it can easily be identified from 40,000 feet in the air. With 34 curves, the narrow two-lane road clearly resembles a snake writhing its way from Interstate 75 to the Big Cypress Reservation over the course of 19.6 miles. A notoriously dangerous road, it will soon become safer thanks to a new construction project to renovate it.

About 100 people, including Tribal and federal dignitaries, attended a ceremonial groundbreaking for the $4-million-plus project on Nov. 30 at Big Cypress. Many attendees have lost loved ones or know people who have been injured on Snake Road and hope adding safety features will prevent accidents in the future.

“It used to take all day to get here,” Chairman James E. Billie said. “I remember Lady Bird (Johnson) wanted the straight road to be curved to make it more scenic. That road has injured a lot of people and took some lives. Hopefully, now it will be a safe road.”

While on the campaign trail in the early 1960s, Lyndon and Lady Bird Johnson noticed the rundown and unattractive state of the nation’s highways. When Johnson became president, Lady Bird pushed for beautification of the highways, which resulted in the passage of the Highway Beautification Act in 1965. Snake Road was built in the late 1960s as part of that program.

“If Lady Bird would have had to drive Snake Road, she would have changed her mind about the curves,” President Tony Sanchez Jr. said. “If you live out here, when it is dark, it’s a dangerous road. As the Tribe grows, more demands will be placed on the road. We have the opportunity to correct the issues with the road.”

The 4.3-mile project stretches from 100 feet east of the Junior Cypress Rodeo and Entertainment Complex to the northern boundary of the Big Cypress Reservation. Funding comes from the Federal Highway Administration and the Bureau of Indian Affairs. The two current 10-foot-wide lanes will be expanded to two 14-foot-wide lanes with a 16-foot-wide paved median; a 5-foot-wide sidewalk on the east side of the road; and a 12-foot-wide multi-use path on the west side. An improved drainage system, including culverts and pipes, will be added, in addition to lighting, guardrails and protective crossing features. The schedule for completion is September 2014.

“This is a great thing for the Seminole Tribe,” said M. Franklin Keel, director of the Eastern Region of the Bureau of Indian Affairs. “Across the nation, Indian roads are in disrepair and don’t meet safety standards. This will give the Tribe a safe, well-maintained road. Safety factors are the most important issue here.”

The Tribe has worked on obtaining federal funding for this project since 2005.

“This is a good moment,” said Big Cypress Board Rep. Joe Frank. “The community has looked forward to having good, safe roads for a long time. But this isn’t the finishing point. All that money for federal funding takes lobbying.”

The Tribe is working in conjunction with the Miccosukee Tribe to secure additional funding for the most dangerous and curviest part of Snake Road leading to I-75.

“We’ve watched this little road take lives for years,” said Big Cypress Councilman Mondo Tiger. “Joe and I have worked together to get this done. The road hasn’t been worked on since the 1970s, and a safer road is needed for this growing community.”

Residents of Big Cypress will certainly benefit from the improvements, but it will also help the Fire Department, including the paramedics, respond to emergency calls more easily and safely.

“Lady Bird wanted to make sure every road built had an aesthetic value. Now we are finally able to make some changes to the road,” said Mike Tiger, the Tribe’s treasurer. “Before Snake Road, it used to take two and a half hours to get from Hollywood to Big Cypress. You had to go up and around Clewiston on two-lane roads. When you did it every day, it was a long, hard trip.”

U.S. Congressman Alcee Hastings sent a letter congratulating the Tribe on the groundbreaking. Representatives from the offices of Sen. Bill Nelson and U.S. Congresswoman Debbie Wassermann Schultz spoke about the significance of the upgraded road to the Tribe’s safety. Members of the Bureau of Indian Affairs, Federal Highway Administration and the Florida Department of Transportation also spoke at the ceremony.

“We want to preserve the quality of life during the project and after,” said Stan Rodimon, Chief Community Planning and Development Officer, who oversees the project. “The drainage system will cut down the mosquito population.”

Although some were nostalgic for the allure of Snake Road, safety is the most important aspect of the renovation.

“I’ll miss the road because I always enjoyed what Lady Bird did, but I also know the road well,” Chairman Billie said. “New people don’t know the hazards of the twists and turns. I’ve lost cousins and friends on the straight part of the road, too. At night, you’ll be driving and the next thing you know a 10-foot alligator, wild hog or deer will cause you to go off the road. You just have to go slow and be careful. For a guy that grew up and lives out here, I’ll miss it.”