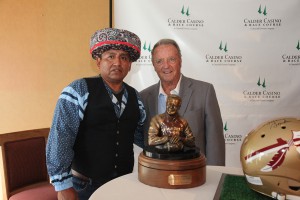 MIAMI GARDENS — The Seminole Tribe has had a special relationship with Florida State University (FSU) since 1947, when the school chose Seminoles for the team’s name. Former coach Bobby Bowden had an enduring relationship with the school; he coached the football team from 1976-2009, won two national championships and earned the title of college football’s most successful coach with a record of 377–129–4.

To commemorate the relationship between the Tribe and Bowden, Tribal member Richard Osceola presented him with a bronze bust of the coach at an FSU and University of Miami rivalry luncheon at the Calder Race Course in Miami Gardens on Oct. 19.

“We take a lot of pride in the fact that Bobby Bowden was the winningest coach under the Seminole name,” said Osceola, who presented the bust on behalf of Tribal war veterans.

Made by longtime artists of the Tribe Bradley Cooley and Bradley Cooley Jr., the gift depicts Bowden in an FSU jacket with his hands draped over a football. Created in 2009, during Bowden’s final year coaching, the bust stands 14 inches high and is a signed artist’s proof.

Tribal veterans Stephen Bowers and former Chairman Mitchell Cypress came up with the idea of the bust, which the Chairman’s Office funded, and they spearheaded getting it made for Bowden.

“He never got anything from the Tribe in all the years he coached,” Bowers said. “I’m glad Richard finally got it to him.”