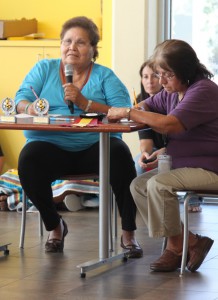 BRIGHTON — Lorene Gopher has been fighting to preserve “a dying language” for more than 30 years, and she’s not giving up.

Every weekday, Brighton’s Cultural program director arrives at Pemayetv Emahakv Charter School to teach Creek, and although she’s discouraged at times, she’s seen progress among the youth in her classroom.

There are some who are really interested, and there are some who come because they have to come, she said. But either way, this generation of Seminoles can speak and understand more Creek than their parents can, and that’s something to celebrate, she said.

Administrative assistant Michele Thomas credits Gopher and Cultural language coordinator Jenny Shore for their invaluable contributions to the language program, which started as an after-school extracurricular activity and blossomed into the foundation of the Charter School’s curriculum.

“I always tell them that they can’t even think about retiring because of their importance to this program,” Thomas said. “They’re fluent speakers who develop all this curriculum. They are the hub of this whole thing – the Creek language being taught in this community.”

Gopher was a driving force behind the opening of the Charter School in 2007, which incorporates mandatory Creek classes into students’ daily schedules.

“Now, we have a captive audience,” Gopher said. In the five years that the school has been open, Creek has seen a bit of a revival thanks to the seven language teachers drilling the students daily.

Gopher, 67, is one of five instructors fluent in Creek, she said. Gopher learned Creek from her grandmother Lucy Pearce, aunt Ada Pearce and great uncle Billy Bowlegs III, who raised her in Brighton. Her mother, Annie Pearce Bowers, Snake Clan, died when she was 3; her father is the late Andrew J. Bowers Sr.

Gopher also learned English in order to interpret for her grandma when they went in to town.
“When I went to school, English was my second language,” she said.

Back then, she was immersed in Creek and had a wealth of elders to ask for help with any stumbling blocks in the language, but things are different now.

“If I don’t know something (in Creek), I don’t have my mom or grandma to ask, so I ask my older sisters and they’ll help me out, but there are no resources where I can go to find out, so I’m just racking my brain,” she said.

This realization drove her to dedicate her career to preserving the language.

“I realized that we were leaving our language to our younger people,” she said. “My kids could understand it but couldn’t speak it. We’re probably the last generation of fluent speakers.”

In 1979, Gopher met with Shore and Dean Tiger, a Muscogee Creek from Oklahoma, to adapt a similar alphabet to his; that way the Seminoles could have a systematic way of writing the language.

“Back then, people liked to teach sewing, beading – anyone can do that,” Gopher said. “My language is what identifies us – who we are.”

Gopher helped establish a written form of Creek and worked as a Creek language consultant.

“We didn’t really have any curriculum to teach, so we kind of winged it,” she said.

In 1990, she took a job as an administrative assistant to Billy Cypress, making significant contributions to the planning and opening of the Ah-Tah-Thi-Ki Museum. In 1995, she worked at Brighton’s Culture Center in addition to being a bookkeeper and secretary for the Seminole Tribe, Inc. She recognized the growing need to keep Creek alive and developed lesson plans to share with others.

She started teaching preschoolers and then expanded to teach older kids after school (many coming from Okeechobee schools), squeezing in the time to teach Creek whenever students would give it to her.

Wanting more time with the students, Gopher arranged with the School Board of Okeechobee County for her to teach at Seminole Elementary School twice a week in place of study hall or another elective. She taught on site for about five years.
Her next step was a pull-out program where students were taken out of their schools and brought to the reservation every Friday for a full day of instruction in culture and language.

“That helped us a lot,” she said of the additional time, resources and convenience that having them on the reservation allowed.
But Gopher, other language advocates and many parents agreed that a full day still wasn’t enough time for students to pick up the language. They concluded Creek needed to become part of students’ daily schedules. As director of Cultural Education, Gopher discussed the idea with then Education director Louise Gopher. In time, Pemayetv Emahakv (which fittingly means, “Teaching Our Way”) opened as the first Tribal charter school in the Eastern U.S.

“She was on the front line of creating and building that program, which eventually evolved into us lobbying to have a school so that that program could expand to five days a week,” Thomas said. “We built the school solely because it would enable us to make the Creek language a part of the daily curriculum.”

The school has 256 students enrolled and is making progress in imparting the language upon them with daily curriculum. A development team has created helpful lesson plans and benchmarks for students, Gopher said.

Yet she finds a barrier for students.

“They probably get discouraged because there’s no reinforcement at home because their parents don’t speak the language,” she said. “I think somehow we need to get the parents involved.”

Gopher wonders if having parents access a website that the Culture Department’s Amber Summeralls created a few years ago would help. The site features spelling words and weekly lessons, and Gopher said students find it helpful. Tribal members interested in access to the website can contact Brighton’s Culture Department at 863-763-7501 for details.

Despite the challenges of teaching a dying language, Gopher enjoys the progress she’s made. She said what’s most rewarding about teaching students Creek is “to see them learn and speak and sing.” She likes watching them excel in spelling bees and perform at events like the recent Veterans Day celebration in Brighton, where students sang God Bless America in Creek.

“I consider myself a traditional person,” she said. “In our way, we’re supposed to be able to share what we know to anyone that’s interested in learning and asks.”