Skip to content
You are here
Home > Sports > Trevor Osceola: proud to be part of the team 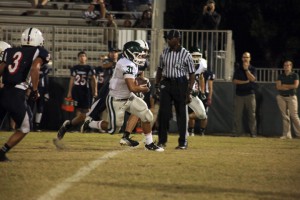 FORT LAUDERDALE — Peer pressure may have had something to do with why Trevor Osceola started to play football in sixth grade, but love of the game and natural talent are the reasons he still plays five years later.

“Some of my friends were playing, so I decided to go out for the team,” said Osceola, 17. “I fell in love with the game. I like the environment under the Friday night lights, and the team is like a family.”

Now in his junior year, Osceola plays as a running back on the varsity team at Pine Crest School. The team had a winning record in the regular season and won their first playoff game against Florida Christian 31-14 on Nov. 1. Osceola was a standout in the game, carrying the ball repeatedly.

Osceola’s late friend Payton Barber initially got him interested in football. Barber was in a plane crash with his parents three years ago, which had a major impact on Osceola’s life. To this day, he plays to honor his friend.

“Playing for him always makes me feel better,” Osceola said. “He’s my inspiration.”
Others who have inspired Osceola include Miami Dolphins running back Reggie Bush and former teammate Traveon Henry, who is now a running back for Northwestern University.

“Traveon took me under his wing and was like a big brother to me,” Osceola said. “Reggie Bush is a humble man who gives respect to his offensive line. A running back only goes as far as an offensive line will carry him.”

Some of the challenges of being a student athlete are the twice-a-day practices and dealing with losing games. Osceola realizes no matter how upsetting a loss can be, not every team goes undefeated.

“Coach (Jim) Pletcher tells us to wake up the next day, put our feet on the floor and go back to work,” he said.

Osceola works hard to keep up his GPA and organize his time. Pine Crest offers mentors to help students with time management skills, which helps Osceola complete schoolwork and still have time to do homework at night. But he is also a serious student of football and often watches old games with his football idols, including former Dallas Cowboy running back Emmitt Smith. 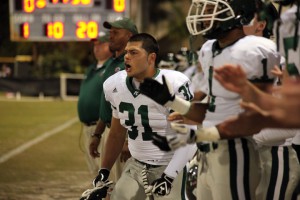 “I watch his games and slow them down so I can learn his moves,” Osceola said. “I do the same with Reggie Bush’s games. I try to be a combination of both of them.”

Osceola hopes to play college football after graduation and has already received letters of interest from colleges.

“The coaches say not to worry about all that yet; the letters will come in and colleges will want you to play,” Osceola said. “I try not to think about it too much; I just go out there and play. If someone wants me, that’s great.”

The most rewarding thing about playing on the team is the relationships he has built with his teammates.

“We are all willing to do what we have to do to win; no one is selfish on the team,” Osceola said. “We don’t exclude anyone. After our Saturday practices, we all show up at someone’s house and hang out together. You make a lot of good friends in football.”

Osceola’s advice to students interested in being an athlete is simple: Try all the sports and stick with the one you love.

“Athletics teaches a lot more than sports,” he said. “It teaches discipline, how to work with others and mental toughness. It’s also made my family happy and proud of me. I have always tried to make them proud on the field, in the classroom and at home.”

Pine Crest won all their playoff games and will play in the Southeastern Football Conference championship at Florida Atlantic University on Nov. 17.