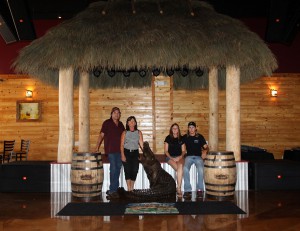 HOLLYWOOD — The Swamp, a new destination which epitomizes a fun evening out in South Florida, opened at the Hard Rock Seminole Paradise in July.

Owned by Tribal member James Madrigal and his wife, Sheila, of Brighton, The Swamp is a Seminole-themed nightclub complete with a chickee and Seminole paintings. The chickee, used as a stage for the band, was built by Chairman James E. Billie.

“The Chairman came in the other night with his family and was so happy with the final look,” Sheila said. “People can’t believe how well it turned out.”

The nightclub contains wood walls, Seminole artwork and a tin roof over the bar, while a large, open-mouthed, metal alligator sculpture guards the stage. Patrons love to pose for photos with the harmless beast. The bars at the front and back of The Swamp open directly to the outside through large roll-up doors, beckoning people to come check it out. Loud classic rock music and a spacious dance floor complete the ambiance.

“This isn’t the South Beach look; we wanted to reflect this part of Florida,” James said. “We are getting great feedback from people who come in; they say it’s an inviting and homey atmosphere.”

Entrepreneurs for 25 years, the Madrigals own two other businesses near Brighton in Lakeport: Ridge Runner Airboats and J & S Trees. Their sons James Thomas, 24, and Garrett, 21, work in the businesses with them.

“When the economy slowed down, the opportunity for The Swamp came up, and we said, ‘We’re there,’” Sheila said.

“The Council saw that we are hard workers and approved the business,” James added. “But the most important thing is to have our sons working with us. We try to teach our kids that nothing is beyond you; if you put the effort into it, you will succeed.

During The Swamp’s first week in business, the family took note of what worked and what needed modifications. The staff of 18 adjusted well and the crowds rolled in, lured by the music and friendly atmosphere.

“I like the vibe here. It’s different from what I’m used to,” Garrett said. “I’m excited to see how many people will show up next weekend.”

One enthusiastic customer was so impressed with The Swamp and pleased to learn it is family-owned, he offered to buy Sheila a shot of tequila. Other equally impressed patrons vowed to return often.

“I saw people’s faces light up when they saw the bar doors open, looked inside and heard the band playing,” James said. “They came inside and had a good time. This is what the Hard Rock is all about: open, inviting and fun.”