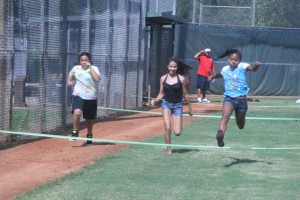 NAPLES — Everybody was a winner when Naples and Immokalee youth participated in the first Naples Field Day Challenge at the Golden Gate Community Park on Aug. 14. The young athletes took over the ball field and surrounding shady park for a full day of fun-filled activities and a picnic cookout.

The initial format called for team challenges from the two communities. Tabulation of times and points scored created a narrow margin from one activity to the next, and both sides were soon cheering for each other. It became apparent that they would need to change to an individual status because of uneven age distribution, and the end results were becoming a draw. Blue ribbons were awarded for first place in each age category.

Temperatures soared into the high 90s with a heat index of 103 degrees. Anticipating these conditions, outreach specialist Sandy Osceola created rehydration stations throughout the courses, offering Gatorade, bottled water and fresh fruits floating in an ice-filled bath. She gave a brief presentation on the importance of making healthy, responsible choices, exercising caution during exertion and ways to safely achieve potential.

Warm-up exercises preceded the 50-meter hurdles, which set the tone for the day. Beginning with the little people, laughter filled the park as 3-year-old Nahdea Osceola-Hart ran up to the first barrier, stopped, pushed it down to climb over and then ran under the next three hurdles to the finish line yelling, “I win, I win!”

Immokalee’s Aaron Alvarado and Aldrice Cummings aced their divisions on the track, while Angelina Osceola-Lugo, Eliska Slavik, Dominic Osceola-Lugo and Ross Zepeda put Naples on the charts. Marissa Osceola challenged her sister, Jessica, to a grudge race, only to be beaten by their cousin Ross Zepeda as he passed them up at the finish line.

The sack race was a big hit with a surprise climax. Liaison Zepeda encouraged the staff members to accept a challenge from the youth while saying that they could add it to their resume. He thought he was safe from the competition until the children forced him into a burlap bag to enter the race and took over his microphone. Laughter followed one wreck after another and a pileup at the finish line.

Wooden tomahawks were passed between age groups during the relay races, while strength and distance played an important role in the medicine ball or spear throw and archery competitions.

As the temperatures climbed, break time was filled with less strenuous games. A little music, hula hoops and agility exercises slowed the pace but not the level of fun. Forming a circle to support a colorful parachute, all ages worked together to control a ball in a sequence of patterns as teamwork moved it into the center pocket. They quickly realized that every member of the team became vital to the effort.

A picnic lunch of southern barbecue was served hot off the grill with all the fixings. Topping off the meal were slabs of ice-cold watermelon under the shade of the big oak trees. After a short downtime, the youngsters were given the option of returning to the game course for several more scheduled events or cooling off at the water park. A big splash signaled their unanimous decision for an afternoon of water sports.

“The combined staff and participants all deserve gold medals for today,” Liaison Zepeda said. “This was a great interaction opportunity between the Naples and Immokalee communities rather than a rivalry. Whenever youth can broaden their horizons by meeting new people, making friends and enjoying healthy, fun-filled activities, it is a wonderful experience. The staff did a tremendous job and created more activities than we could possibly complete. We are looking forward to making this an annual event.”

The Chairman’s administrator Danny Tommie rewarded each participant with a ticket to attend the movie of their choice.

“I want to compliment everyone on their courtesy and respect for the public facilities,” Sandy Osceola said. “The children made good use of the trashcans throughout the day, making the final cleanup a snap. I am looking forward with pleasure to participating in more of these combined events in the future.”