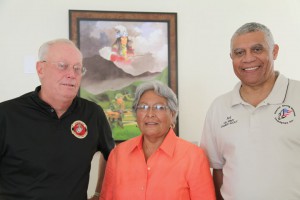 ST. PETERSBURG — Brighton resident Jill John was born almost 32 years ago with spina bifida, a birth defect that involves the incomplete development of the spinal cord. She has spent most of her life in a wheelchair and has endured more than a dozen major surgeries.

Her father, Seminole Tribal member Joe Lester John, served as a U.S. Air Force combat aircrewman during the Vietnam War. He fought in the 1 Corps Tactical Zone, infamous for containing one of the war’s highest concentrations of poisonous herbicides; there in the polluted jungles of northernmost South Vietnam, he was exposed to Agent Orange, code name for chlorinated phenoxy acid in ester form – an herbicide defoliant used during the Vietnam War by the U.S. military from 1962 to 1971 in Vietnam, eastern Laos and parts of Cambodia. Healthy before he left for Vietnam, Joe Lester returned a diabetic, suffering from debilitating heart disease the rest of his life, which ended by stroke on April 27 at the age of 67.

Undisputed scientific studies identify Agent Orange as one of the most toxic poisons a person could ever touch or breathe. Exposure can lead to a lifetime of ill health and the onset of dozens of insidious diseases to the exposed. And it instigates crippling birth defects, particularly spina bifida, to the children of the exposed. And their grandchildren.

Still, it took the U.S. Department of Veterans Affairs (VA) more than 31 years to acknowledge the Agent Orange service-connected disabilities of Joe Lester and his daughter. He finally received a partial disability on April 1, less than a month before he died.

“When soldiers came home in the ‘70s and they lived in a rural area, the VA forgot about them,” said Marc McCabe, Bureau chief and regional director of the Vietnam Veterans of America (VVA) in St. Petersburg. “There was no outreach. No veterans were more ignored than the American Indian vets. Vietnam vets across the board were discriminated against. Most of those who did manage to get through the bureaucracy to apply for Agent-Orange-related disability were turned down.”

Tribal member Julia John, wife of Joe Lester for 41 years and mother to Jill, said, “A long time ago, my husband was reading one of the vet newspapers and saw an article about spina bifida. He wondered if we should take a look into it…Washington, D.C. is a very confusing place. You get lost up there. We didn’t have the resources. We didn’t know who to go to. We just gave up. Then along came this guy.”

Julia was referring to McCabe, who, with his assistant, VVA Service Officer Art Taylor, recently visited Julia at the Seminole Veteran’s Building in Brighton. He stages regular counseling sessions for Seminole veterans and their families at the Veteran’s Building each month.

“My first thought was ‘OK. You are here now, but you will disappear like all the rest of ‘em,’” said Julia, who now admits, “I was wrong. Marc is someone really dedicated. He knows where to go and what to do, and he doesn’t give up.”

McCabe called what he does “pushing.”

“I push and push and push and keep pushing – whatever it takes,” he said. “The VA, the Army, none of them want to give you anything, even if they know you are suffering. You have to go to them and ask, then make your case.”

Although he said, “We are all on the same side,” McCabe spends most of his time fighting the VA and the military, boldly embedded in the “enemy” camp, unworried about being evicted or silenced, never having to deal with VA decorum of any sort.

“If I need to talk to the director, I just walk in there and talk to her,” he said. “I don’t have to jump through hoops.”

Turned down several times because of “sloppy paperwork and just plain ignorance on the part of the VA,” said McCabe, Joe Lester never received full justice.

“He was rated as a single instead of a man, wife and disabled daughter,” McCabe said. “I was working on his appeal. He was very happy. He looked fine. All he could think about was providing for Jill. It was probably the last thing he said to me: ‘Please help my daughter.’ With that kind of mandate, I knew I had to do it for Joe. I was determined to push and push until it happened.”

Coincidentally, McCabe’s niece’s husband was also a Vietnam vet. McCabe is “pushing” their case as well.

“I learned a lot about spina bifida in a short amount of time,” he said. “And the more I learned, the more I was confident we were all going to win.”

Dependent, service-connected disabilities, for any reason, are rare, said McCabe, who traveled to Denver on his own expense to make a case for Jill before the VA’s special spina bifida review board. Still, Jill was turned down twice before her appeal was accepted. Julia said she will never forget that day: “Jill was in the hospital. When I called and told her that Marc called and said the paperwork all went through and it was sealed in blood, the check was in the mail, she started crying.

The decision set Jill’s disability at the highest VA rating. She received a retroactive check and additionally will receive a monthly check for life.

“We just don’t know how far back they will go,” McCabe said. “That’s the next battle.”

Jill will receive full compensation for all medical care, also retroactive back to an (as of yet) undetermined time.

“Since most of that was paid by the Seminole Tribe, you are talking about a reimbursement to the Tribe of potentially millions of dollars,” McCabe said. “Multiple major surgeries and lifetime medical care for spina bifida victims is extremely expensive.”

The VA will assist in wheelchairs, vehicles and other necessities all customized for Jill, as well as travel expenses and fees to support attendants.

“Now I can rest in peace; there will be someone to take care of her, even a professional caregiver if she wants it, when I am gone,” Julia said. “Jill is very independent. She doesn’t like to be called ‘special.’ Her dad and I always tried to fight for her, but you can’t do everything.”

“She actually has a certificate to be a phlebotomist. But she never used it,” Julia said. “She said, ‘Mom, I don’t know if anyone would want me to take their blood. They’ll see me in the wheelchair and run the other way.’”

Today’s Vietnam government estimates chemical herbicides killed or maimed 400,000 people and produced another 500,000 children born with birth defects, ranging from spina bifida to retardation, all as a result of chemical herbicides. The Vietnamese Red Cross estimates that up to one million people now living in Vietnam have disabilities or health problems because of the some 20 million gallons of Agent Orange and other chemical herbicides and defoliants dropped from the air by U.S. military planes.

No one knows how many U.S. veterans or their descendents are affected by Agent Orange. McCabe will join VVA director of Communications Mokie Porter and Associates of Vietnam Veterans of America (AVVA) president Nancy Switzer for a “Faces of Agent Orange Town Meeting” at Brighton on Sept. 20, one of five they have planned around the state.

“We’ve got a lot of work to do out here in Seminole Country,” McCabe said. “There are 48 Seminole veterans, and 40 of them are Vietnam (or Vietnam-era) vets. A lot of them, including those who have passed on, never received their tombstone medallion. There are widows and dependents due benefits. There are appeals of appeals. It goes on and on. Our goal is simple: to never ever leave any veteran or their family members behind.”