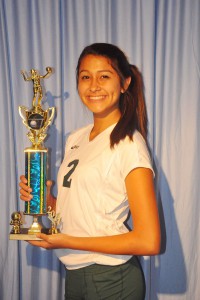 JUPITER — The Jupiter High School volleyball team has a new sensation on campus this year: Seminole Tribal volleyball player Airianna Nunez. Nunez began her volleyball career in the second grade. Her potential to be a great player showed immediately because of her careless and reckless enthusiasm to do whatever necessary to help her team.

Nunez played with the travel team Big Lake Juniors but really began to hone her skills under the mentorship of Bruce Conrad at Yearling Middle School in Okeechobee. During her reign with the Yearlings, the team went undefeated for three years in a row. That’s 57 victories straight against Okeechobee’s surrounding competition.

Now relocated to the Jupiter area, Nunez played with the travel team 16’s “Jupiter Chill” at the age of 14. She received training from both former Florida State University and University of Florida volleyball players. Together, the highlight was winning the Gold Division at the Fort Lauderdale Convention Center along with other numerous first-place victories.

She competed with 70 other volleyball players to vie for a spot on the Jupiter High School team. Now a member of the Warrior program, they have 10 straight victories along with a first-place tournament win. At the tournament in Park Vista, Nunez received the MVP Award for her outstanding play throughout the two-day tournament. Jupiter Varsity High School Coach Betts said, “She has one of the best vertical leaps I’ve seen, and she’s crushing that ball.”