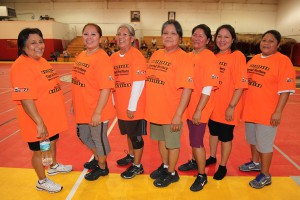 BIG CYPRESS — During the fifth annual Tigertail Brothers Memorial Basketball Tournament, one thing stood out above all others: expansion from an all-Indian format to an open one, changing the landscape of how this year’s competition played out.

Held from Sept. 15-17 at the Big Cypress Reservation’s Herman L. Osceola Gymnasium, a new champion from the men’s side emerged as Plainszmen – a team without any Seminole Tribal citizens – outlasted perennial favorite and last year’s champ Big Town, 50-45, in the title game.

Meanwhile, on the women’s side – both the male and female tournaments started on Sept. 16 and concluded on Sept. 17 – the Lady Ballers won the tournament yet again as they defeated Cold Play, 48-43, in the final.

As for the Legends men’s competition, only one team was available, which means there was no competition in the male category.

According to Minnie Tigertail, the tournament’s organizer and Tribal mother of the late Duane and Malcolm Tigertail, a total of 18 teams from the adult female, adult male, Legends female and Legends male categories competed in this year’s competition. The inclusion of more teams and non-Seminole Tribal players, Tigertail said, allowed for more participation and more variety.

“It turned out good,” Tigertail said. “That’s the way I wanted it. We had a team from Oklahoma here, one from Miami, one from Orlando and one from Hollywood that’s non-Tribal. We wanted more people from all over the United States to participate.”

Big Cypress Tribal citizen Byron Billie, who played for the Hustle Hard adult male team, said he was excited to see the addition of new teams to the annual competition.

“It has become very competitive,” Billie said. “Some people may see it one way, but I look at it as all fun. It’s brought out a lot of really good competition here.”

Growing up as a Tribal youngster, Billie talked about the impact that both Duane and Malcolm had on his life.

“I’m real big on home pride,” Billie said. “They played very important roles in my life. It brings back all the good memories I had with them when I was a kid. I had a lot of interaction with both of them. I really looked up to them; they were good people.”

Tigertail talked about the importance of keeping the Tigertail Brothers Tournament alive in honor of her two late sons.

“They (Malcolm and Duane) were both Warriors,” Tigertail said. “They were always out there on the court. Basketball was their favorite sport. So with this tournament, it seems as if they’re not gone. They’re physically not here, but this brings them back in spirit. I miss them daily. They’ll always be in my heart forever.”