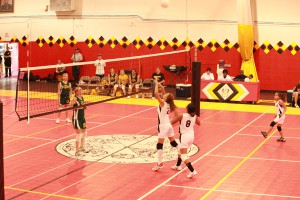 “I don’t know much about volleyball, but I do know about our fans,” Big Cypress Tribal Council Rep. Mondo Tiger said just after the Oct. 3 home opener concluded. “Look at the gym. It was almost full. The main thing for us here is to let them know we support them. The girls have a lot of talent in them, and we want to be there for them every step of the way.”

“It was a fun game for us,” Curtis said. “It was good to see both of our teams growing more comfortable out there on the court. I see a good future for the Ahfachkee program.”

The second game, played on the next day, proved to be an inspiring three-set victory over King’s Academy. Ahfachkee seventh-grader Sydnee Cypress hit the team’s game-winning shot in the game, propelling the Lady Warriors to its first win in program history.

“I just wanted to hit the shot over the net,” Cypress said. “It felt good for our team to pull the win out.”

“I think we should have communicated with each other better,” Tommie said. “But I think we’re starting off good as a team. If we improve our attitudes and play together more, then we should win our last two games of the season.”

“If Ahfachkee sticks together, I think they’ll be a great team down the line,” King’s Academy volleyball head coach Kathy McReynolds said. “They play hard and they’re strong. They have a great school and a great community. I can’t wait to see them next year.”

Schyvinch said it’s been a work in progress for the upstart team, who first came together on Aug. 23. Overall, she’s confident the girls will make continuous improvements in their team game as the 2012 season rolls around next fall.

“It’s a stepping stone; I look at it as that,” Schyvinch said. “The girls are learning as they go along. They’re building in their game as a team and they’ve been working hard together. It will take some time, but everything will come together for them down the line.”

A season-ending banquet, which will recap all the specific highlights of the program’s first season, is tentatively scheduled for Thursday, Nov. 10.