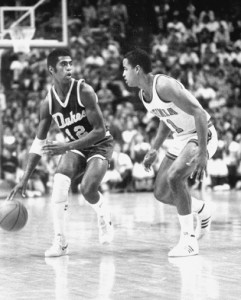 HOLLYWOOD — An exceptional college sports career is something an athlete can be proud of for a lifetime. Tribal employee Charles Fisher, a James Madison University (JMU) graduate of the class of 1983, recently learned he will be inducted into his alma mater’s Athletic Hall of Fame for the years he played on the school’s championship basketball team.

“It’s a great honor, and I am humbled by it,” said Fisher, a contract specialist for the Buildings and Grounds Department. “I had a great career there, and I’m thrilled to be in the Hall of Fame.”

Fisher attended JMU, in Harrisonburg, Va., on a basketball scholarship for four years. While an undergraduate, he played point guard and led his team to victory in the National Collegiate Athletic Association (NCAA) tournament, Colonial Athletic Association division, three times. He was named Most Valuable Player in 1981 and, during his senior year, was the second leading free-throw shooter in the nation. Fisher said he averaged 12 points per game throughout his college career, was named the team’s top defensive player and helped them average 23 wins per year.

While in college, he learned to balance athletics with academics. His coaches helped instill that discipline by putting the team in study hall 10 hours a week.

“That was where I learned good study habits and how to stay focused,” Fisher said. “But you also needed good family and friends around you to keep you humble. It was challenging, but I love challenges.”

Living the life of a student athlete prepared him for life after school, and Fisher credits his coach, Lou Campanelli, for keeping him on track.

“I believe my college experience helped shape the character and values I have today,” he said. “I learned to make academics my No. 1 priority so I could be successful in life.”

Drafted by the NBA’s Philadelphia 76ers in the ninth round after graduation, Fisher played point guard for the team for one year. The difference between being on a college team and a professional team was huge.

“In the NBA, you know someone else wants your job, so you are always trying to perfect your craft,” Fisher said. “You need to have a lot of confidence.”

After being released by the 76ers, he had opportunities to play basketball in Europe and China, but Fisher chose to coach instead. He embarked on a 13-year career as a college basketball coach at Roanoke College in Virginia; Samford University in Birmingham, Ala.; Radford University in Roanoke, Va.; the University of California at Berkeley; and Florida A&M University in Tallahassee.

In 2011, he was nominated the Colonial Athletic Association’s Legend of the Year for demonstrating good character, values and sportsmanship throughout his college career. 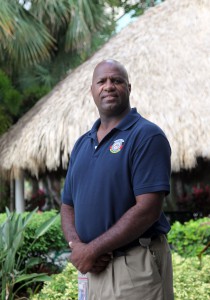 After graduating with a degree in physical education, Fisher earned his master’s degree in the same field from California State University, Fresno. Following his career as a college coach, he spent more than 15 years as a physical education teacher, coach and principal at schools in Miami Dade and Broward counties. Then, after retiring from education, he felt compelled to continue giving back to the community and joined the Seminole Tribe in October 2011.

“I see this as a great opportunity to contribute to the Seminole Tribe,” he said. “This has been a great marriage.”

Fisher, who earned his doctorate in Christian education at Jacksonville Theological Seminary in 2007, also serves as minister at the New Mount Zion Missionary Baptist Church in Liberty City. He is also a motivational speaker and addresses school groups, using sports as a metaphor to get his message through to the students.

The induction ceremony will take place at the university on Oct. 12.