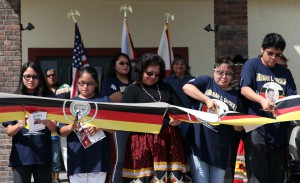 BIG CYPRESS — Herman L. Osceola may have lived a short life, but he left a long-lasting legacy for the youth of the Tribe. Before joining the Marine Corps, Osceola worked with children who were always happy to see him at the Big Cypress Gymnasium.

After renovations, the Herman L. Osceola Gymnasium in Big Cypress was rededicated in his honor on July 5. A life-size bronze statue of Lance Cpl. Osceola now stands in front, watching over the kids as they enter through the doors.

“Today brings me back to 1984,” Ruby Osceola said. “He was the smartest son and he always called me. I can hear his voice clearly today.”

In March 1984, Herman L. Osceola was participating in a joint American and South Korean military exercise 200 miles southeast of Seoul when the helicopter he was in crashed in bad weather. Eighteen American and 11 South Korean soldiers perished that night.

“Herman was very outgoing and friendly,” his sister Veldina Osceola said. “He got along with everyone, especially kids. They were always so happy to see him and he kept them out of trouble.”

Chairman Billie served in the U.S. Army during the Viet Nam conflict from 1965-1968, and he is well acquainted with military life. He believes growing up in the swamp helped toughen him up and honed his survival skills.

“Back in the 1980s, this young man Herman talked about joining the military,” the Chairman said. “A few of us were talking about how we thought the time was right to encourage kids to join the military. I told Herman how wonderful it felt to represent the U.S. He joined the Marines. Before he left, we had a last drink with him. And then came that awful day.”

Struggling through tears, the Chairman recounted the story of the helicopter going down.

“We enticed him to go,” he continued. “I felt guilty about telling him it was great to be in the military. Even though we lost him, I am still so proud of him.”

“It does not take someone dying in combat to be a hero,” SPD Sergeant Jack Nash said. “When you take the oath to defend this great nation, anyone at any time can be called forth to fight. We do it not to be heroes but to protect our way of life.”

“I knew Herman since he was young,” Rep. Frank said. “I want to thank his family for sharing him with us.”

Councilman Tiger shared a message of respect for him as well.

“When a young man gives his life for his country, it means a lot to us,” he said. “My hat is off to him.”

The first stage of renovations to the gym included the front exterior, entrance and the statue. The inside entranceway and a new roof will be done next, and additional bleachers and a new floor may be added in the future, site manager Josh Jumper said.

The statue in front of the gym was created by artists Bradley Cooley and Bradley Cooley Jr., who have made many sculptures for the Tribe, including those at the Ah-Tah-Thi-Ki Museum, Hollywood Headquarters and Tree Tops Park. Cooley has been a sculptor for 40 years and his son joined him about 20 years ago.

Working from four family photographs, creating the 5-foot, 8-inch, 350-pound sculpture took about nine months. The artists first sculpted the clay, sending Ruby Osceola updates of the artwork to make sure the features were accurate. When they and the Osceola family were pleased with the likeness, they made a mold of the sculpture and sent it to a foundry in Colorado to have the bronze made.

“We are very proud to work with the Tribe,” Cooley said.

After the ceremony, attendees enjoyed a meal and reminisced about Herman L. Osceola.

“He was little younger than me, but we used to hang out,” Janice Osceola said. “He would always do things with the kids; he really loved them. Herman was a good man and lived a good life.”