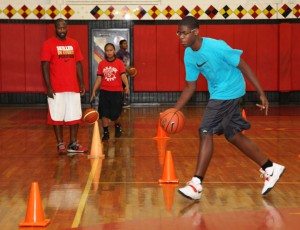 HOLLYWOOD — Youth attending basketball camp at the Hollywood gym are learning a lot more than the best moves on the court; they are also learning skills that will ultimately help them succeed as adults.

Sure, the KCITY basketball program teaches kids the fundamental skills of the game, including dribbling, shooting, defense, conditioning, passing and scoring, but it also teaches them the value of good sportsmanship and teamwork.

“In basketball there are no losers,” KCITY coach K.C. Cullins said. “As long as you play your hardest and have good sportsmanship, everybody wins.”

The KCITY program attracts 20-40 kids each session, and the group takes to the court for some basic drills. During the camp on July 3, campers learned how to control the ball up and down the court, shoot baskets and dribble with their non-dominant hand.

“Basketball is my life,” said Devin Osceola, 16, who plays on his school team at Gulliver Preparatory School in Miami-Dade County.

“I love to play basketball and it’s good exercise,” said Mailani Perez, 16, who plays on the Jewish Community Center team. “I like to practice four times a week.”

Cullins believes he is planting seeds that will teach the kids how to be productive citizens. He tells them not to be afraid to make mistakes; it is the best way to learn.

“The kids love this program,” Tribalwide Recreation director Richard Blankenship said. “It isn’t your everyday program; it’s pretty intense. Our ultimate goal is to increase awareness of the basketball program, so we build multiple teams in multiple age groups for a Tribal league.”

The remaining dates for the KCITY summer basketball program are July 31 and Aug. 2 from 4-7 p.m.