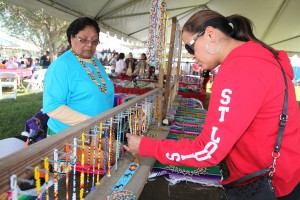 Former Tribal Chairman/Big Cypress Tribal senior Mitchell Cypress spent time at one of the art booths to take a look at a print painting entitled When The Time Comes. He said he could visualize his late wife, Mary Ann Billie-Cypress, and his two late daughters, Michele and Angie Cypress, in heaven.

Inspired and created by painter Guy LaBree, a longtime friend of many Tribal citizens, the Big Cypress Tribal senior explained – in his own words – the significance of the Seminole-style work of art that was featured at this year’s festival.

“My wife is waiting for me to ride with her to the next level,” Cypress said of the painting depiction. “When the eagle brings the hat back to me, it means I will be joining my wife and my daughters. All three of them are riding up there; they’re waiting for me to see them again. That’s what I dream about.”

Cypress went on to talk about how important paintings and pictures are to the Tribe and its citizens.

Cypress discussed in further detail the significance that paintings hold to the Seminole Tribe, specifically when it comes to how the Tribal citizens view a variety of aspects, such as nature, animals, the culture and the traditions they have within their Tribe.

“A lot of the paintings you see are of the clans we have here,” Cypress said. “We have a lot of drawings of alligators, panthers, otters, snakes and others that represent out clans. You’ll know that you’re coming into our history when you look at the art gallery.”

Seminole Princess/Brighton Tribal citizen Jewel Buck, who came out to the AIAC Festival on Nov. 4, said she was pleased to view the vast display of elements as it relates to her culture.

In Buck eyes, features that stood out to her included Clint and James Holt’s alligator show, the variety of Seminole patchwork, beadwork and arts at the booth stands and a special presentation from Dakota Tribe of South Dakota hula dancer John Locke, among several others.

“I’m very honored to meet and greet everyone out here,” Buck said. “It’s a great way to know my Tribe better. As Seminole people, we take time to honor our history and our culture. The arts festival lights up with color all around here. It’s just beautiful to see.”

Immokalee Tribal citizen Rhonda Nunez, who was seen spending some time with Big Cypress Tribal senior Patsy Billie at her beadwork display booth, said she learned a valuable lesson from the Tribal elder on how to create a daisy chain out of a beadwork design.

“I just love it,” Nunez said. “It’s just amazing what you could with the beads here. Our culture department in Immokalee is really involved with our people and is showing us the art of beadwork. I would really like to get back into it myself.”

Meanwhile, Hollywood Tribal senior/ Seminole Princess Chairwoman Wanda Bowers said she noticed the variety of Seminole arts, crafts and foods that were readily made available for the public to experience.

Bowers spoke highly of the variety of Tribal member vendors who showed off their talents at the AIAC Festival. Some of the standouts, according to her, included booths such as the Naples community’s arts and crafts display, Big Cypress Tribal citizen Almira Billie’s Indian food booth and the Tomahawk Ribs food booth, owned by Fort Pierce Tribal citizen Shamy Tommie and his wife, Wanda Tommie.

“You’ve got your faithful Tribal member vendors that love what they do,” Bowers said. “They love to make their own stuff. We’re the only Tribe that makes our patchwork, our beadwork and our traditional foods in our own expression. They love to get that out there to the public.”

“The museum is always happy to see good Tribal Member turnout at AIAC because that indicates they’ve “bought into” this program,” Perry said. “They have a real sense of ownership and pride. And it’s that pride that validates the museum’s mission and goals.”

For more information on the AIAC Festival and all Ah-Tah-Thi-Ki Museum related initiatives, contact Perry at 863-902-3211.