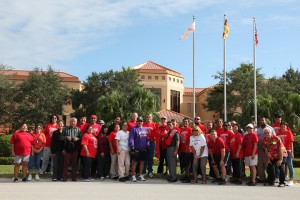 Community members, employees and leaders of the Seminole Tribe of Florida make a concentrated effort throughout the year to combat the use of harmful substances and high-risk behavior. Their combined effort is making a positive impact Tribal wide and is influencing the future.

Once a year, they join millions of Americans in designating one week to raise awareness regarding the need for alcohol, tobacco and other drug and violence prevention, early intervention and treatment services.

Red Ribbon Week began after the kidnapping, torture and brutal murder of Drug Enforcement Administration (DEA) Agent Enrique “Kiki” Camarena in 1985. He angered leaders of the Mexican drug cartels when he was instrumental in the eradication of a multimillion dollar narcotics manufacturing operation in Chihuahua, Mexico, that was trafficking drugs into the United States.

The dramatic events that followed Camarena’s disappearance and death were chronicled in national media and exposed the dark world of drug trafficking and its consequences. An outpouring of support in his hometown of Calexico, Calif., became a voice for prevention to reduce demand for illegal drugs and illegal use of legal drugs in America.

The following year, the California State PTA adopted the Red Ribbon Week campaign, and in 1988 it was recognized nationally with President Ronald Reagan and First Lady Nancy Reagan serving as the first Honorary Chairs. This special week has become an important event for the Seminole Tribe and grows in momentum each year.

The Family Services Department on each reservation coordinates the activities which are sponsored by each of the service departments, community members, churches and youth organizations. Their combined effort produced outstanding results for the 2011 Red Ribbon Week.

“This is a whole collaborative community coming together,” said Big Cypress Ahfachkee School Principal Lucy Dafoe. “The kids can see that it is important from the top down. They have pledged to stay drug and alcohol free. What the community has done of this magnitude is heartwarming to see. I hope that this keeps all our kids and communities safe.”

Big Cypress kicked off this year’s Red Ribbon with a Prayer Walk at the canal and Snake Road intersection. A record number of approximately 80 people participated in the early morning event following prayer and spiritual encouragement from Deacon Joe Osceola Sr., Pastor Arlen Payne of the B.C. New Testament Baptist Church and Moses Jumper Jr. of the First Baptist Church of Big Cypress.

An enormous amount of volunteer service, planning and creativity went into organizing the annual Red Ribbon Parades in Big Cypress and Immokalee. Marching bands, horse drawn carriages, the Color Guard, senior citizen cavalcade, fire trucks, Seminole Casino Immokalee and Seminole Police escort led the way for a multitude of floats prepared by the various departments based on this year’s theme of “It’s Up to Me to be Drug Free!”

The Hollywood Boys and Girls Club in conjunction with the Family Services Dept. sponsored a youth performance night featuring several Tribal musicians. The resonance of drums, guitars and a piano filled the Tribal Headquarters Auditorium for the benefit of parents and friends in this community’s drug free activity.

The creativity held no boundaries in the poster, door and billboard contests held in Big Cypress and Immokalee. Each entry was based on this year’s Red Ribbon theme and displayed enthusiasm and ingenuity making for very difficult decisions on behalf of the impartial judges. The Diana Yzaguirre Memorial Library in Immokalee pulled out all stops and won both the door and parade contest with their extraordinary “Don’t Monkey Around with Drugs” entries that appealed to all ages. Big Cypress hosted a community dinner and awards ceremony for the contestants and their families.

The Kids’ Fun Day in Immokalee left a lasting impression on the community that will display a year round reminder for its residents. Groups of youngsters accompanied by an adult painted each of the community fire hydrants in bright colors, creative designs and drug free slogans. A Backwards Amazing Race and Community Campfire added to the festivities.

The Joshua Street Spiritual Singers from Stillwell, Oklahoma, gave a Red Ribbon performance at The First Baptist Church in Big Cypress with Pastor Bruce Pratt and then participated in a Spirit Night presentation at The First Seminole Baptist Church of Immokalee with Pastor Josh LeadingFox. A special service of inspiration and recognition of a Remembrance Cross drew a full house for both occasions.