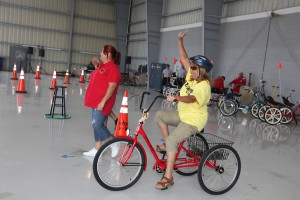 BIG CYPRESS — The home team has finally won it.

For the first time in the Senior Trike Fest’s seven-year history, the Big Cypress seniors outlasted all of their competitors to take home the 2011 Trike Fest crown on Nov. 3.

The Big Cypress seniors were visibly overjoyed by their overall victory, as many of them embraced each other and smiled broadly at their accomplishment.

“It’s a great feeling for us to come out and win it the way we did,” said Big Cypress Tribal senior Moses “Big Shot” Jumper, who won five medals at this year’s Trike Fest, including Male Super Senior of the Year.

“We got motivated and dug in as hard as we possibly could,” Jumper continued. “It really showed out there.”

“It was our turn to be the champions,” Big Cypress Tribal senior Minnie Tigertail said. “Brighton had it for so long.”

Team Hollywood came out on top overall in the Best Decorated Trike category to round out the Trike Fest’s major awards.

Brighton Tribal Council Rep. Andrew J. Bowers Jr., who looked somewhat stunned that his team failed to take home top honors for the fifth consecutive year, summed up how the Trike Fest transpired in his own words.

“We had less people this time,” Brighton Tribal Council Rep. Andrew J. Bowers Jr. said. “That’s why we didn’t win. We’re going to get more people involved next year so we can take the title back.”