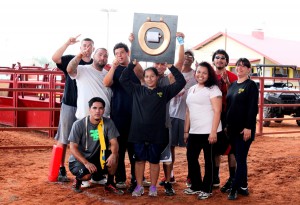 Seven Tribal department teams faced off in a flag football tournament for the right to claim Toilet Bowl honors during Big Cypress’ Employee Fun Day inside the Big Cypress Rodeo Arena on Jan. 27.

“Councilman Tiger wanted to have this event to boost the morale of all the employees we have here in Big Cypress,” said Council’s Office Coordinator Marlin Miller, who served lunch for the employees with the help of Tribal Council representative assistants Noella Dyan O’Donnell and Wovoka Tommie. “We wanted to do something for the employees and let them know we appreciate them for all the work they do for us.”

After two five-minute halves, both teams went into overtime. Buildings and Grounds used seven plays to march its way to the end zone, thanks to a perfect 15-yard touchdown pass from Joel Cavazos to Victor Becerra that proved to be the tournament clincher.

“It felt great to step up for my team,” said Becerra, who was named the Toilet Bowl MVP. “I threw a pick early in the game that caused a touchdown, so I needed to redeem myself there. We just threw it up and I just got open to be in position for the catch.”

The final game between Buildings and Grounds and Recreation/Rodeo seemed to be poised for a rubber match early on, as Becerra threw an interception right into the hands of Recreation’s Frank Moody in the first half. Becerra was one to watch, having made four touchdown catches and two defensive interceptions.

Buildings and Grounds faced a 7-0 halftime deficit because of Becerra’s thrown interception, but they found their way back into the game after Guillermo Rodriguez caught a touchdown pass from Cavazos. Cavazos’ talent shined in the eight touchdown passes he made in the four games he played.

At 7-7, all Recreation/Rodeo needed to do was throw for another score to be one win away from the title. Unfortunately for Recreation/Rodeo, Dustin Lowman threw a pick to Rodriguez close to the end of regulation, with his team having to play defense the rest of the way. Lowman was a force to be reckoned with, having made 16 touchdown passes in the six games he played.

Big Cypress Tribal senior Mitchell Cypress, who did not play in the tournament, said he liked what he saw at the Rodeo Arena.

“I’m a little bit too over-the-hill, so I just wanted to watch the youngsters play the game,” Cypress said. “It was fun to see them all having a good time out there.”