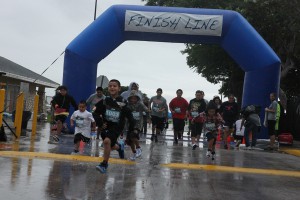 TRAIL — Although touted as a 3-mile walk/run sponsored by the Miccosukee Wellness Center, the Huggins family used the event as an opportunity to honor National Ovarian Cancer Awareness Month in recognition of their matriarch, Kathy, who was recently diagnosed with the disease.

About 20 Huggins family members, all from the Trail community, put on their sneakers and hit the road on the Miccosukee Reservation on Sept. 22. The family donated the T-shirts given out to the 50 participants, which had a teal ovarian awareness ribbon on the back.

“Our family approached the Council to put it on the back of the shirts for everyone to wear,” Trail Liaison Norman Huggins said. “My wife is strong-minded and is doing a lot better than we thought she would do.”

The rainy day of the event may have wet people’s clothing, but it didn’t dampen their spirits as they tried to avoid puddles on the road.

“The event is held three or four times a year to promote a healthy lifestyle and activities,” said Anna Van Stippen, of the Miccosukee Health Department. “More people attend when it isn’t raining.”

The Huggins family in attendance included Liaison Huggins’ sister Alberta Billie, daughter Adriana, and numerous nieces, nephews and grandchildren. Kathy did not attend because she did not want to risk getting sick in the inclement weather, Liaison Huggins said.

“I always like to support community events,” said Stephanie Huggins, who came in first place in the 18- to 28-year-old runner category. “It was very well organized and fun. I also wanted to be here for ovarian cancer awareness.”

The rain stopped after a time, but the water on the course remained, to the delight of some.
“It was excellent,” Jayden Billie, 8, said. “The best part was walking through the puddles.”

A lavish, healthy brunch and prizes, including new bicycles, backpacks and duffle bags, capped off the event.

“I was sweating; I couldn’t believe it,” Liaison Huggins said. “It was a great race.”