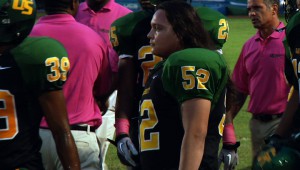 HOLLYWOOD — Joseph John may not be built like a football player, but he plays the game with great enthusiasm on the three-time defending district champion team at the University School in Davie. At 5 feet 7 inches tall, he isn’t a typical defensive lineman or linebacker, but neither was John’s sports hero, former Miami Dolphin player Zach Thomas, who played the same positions as John.

“We have 14 seniors going to play Division 1 football in college,” John, 17, said. “I motivate myself even though I’m short. I work out with the top 14 kids in the state, and I know I make them even better.”

Football is important to John, but it isn’t his ultimate goal in life. With a 4.0 GPA, he has applied to a number of top-tier universities, including Stanford, Dartmouth and UCLA. He wants to study biology and go into the medical field, possibly as a doctor.

Although his football career will likely end after high school, John loves playing on the team, which he said is like a brotherhood. His head coach, Roger Harriott, inspires him both on and off the field.

“He tries to make each of us a better person,” John said. “He transitions us into doing better in school and gives us fundamental guidelines to live by even if you aren’t playing sports.”

The team is undefeated this year (as of Oct. 12). ESPN ranked them among the top 25 high school teams in the nation, and the team is ranked second in the state for all divisions. In 2010, the team was state runner-up in Class 2B finals. The first game of the season, against Trotwood-Madison High School in Ohio, was broadcast nationally on ESPN as part of the network’s high school football kickoff programming.

As rewarding as being on national television was to John, he is equally proud of his accomplishments in the classroom. He is a member of numerous honor societies, including the National Honor Society, the Science Honor Society and Mu Alpha Theta, the math honor society.

“Being in the honor societies and maintaining a high GPA from my freshman to senior year is the most satisfying thing,” he said. “It gave me the chance to apply to so many schools I didn’t think were possible when I was in middle school.”

John was also greatly influenced by his grandparents and parents, who have always taught him to be a good person.

“I just listen to them. They taught me all about my culture, faith and religion,” he said. “They always wanted me to pursue college because they never could. I’m doing this for them, but mostly I’m doing it for me.”

Like many students, John has faced the challenge of juggling academics and athletics. He used to struggle with organization, but he worked hard to overcome that obstacle.

“Now I can get all my work done and excel in my classes,” he said. “I write down all of my assignments and when my tests are scheduled. I also keep all my study guides in one place, manage my time accordingly and get help when I need it.”

These tactics have made a big difference for John and have allowed him the chance to play the sport he loves.

He has some simple advice for other students who want to do well.

“Keep pushing yourself to your limits and past them,” he said. “If you push past what you know you can do, you will perform at a high level. Just follow your dreams. If you have big dreams, you can work toward them and when you get there, you will have a sense of accomplishment.”