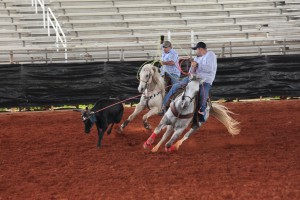 BIG CYPRESS — Cowboys and Indians came to the Junior Cypress Rodeo on their horses, ready to rope steer during the team roping jackpot event on Oct. 13 in Big Cypress.

“Our goal is to have events once a month,” said Al Tigertail, Rodeo program director. “Most of these ropers compete against each other a lot; it’s kind of like a family.”

About 25 competitors, including Tribal members Tigertail and Happy Jumper, controlled their horses as they tried to rope the fleeing steer. Most competitors came from Miami and Broward County.

The team roping technique was developed by cowboys working on ranches who needed to capture and restrain animals that were too large for one person to handle. The two ropers on each team have different roles: One is a header who ropes the steer around the horns or neck, and the second is the heeler who ropes the animal’s hind feet. The sport requires the cooperation and coordination of the ropers and their horses to succeed.