Skip to content
You are here
Home > Community > Tina Osceola gallery talk: ‘Art is the voice of people’ 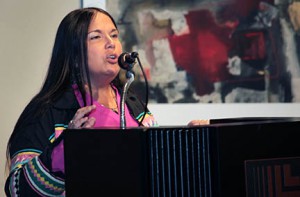 MIAMI — During a gallery talk at the Lowe Art Museum at University of Miami March 7, Tina Osceola explained to about 100 attendees the importance of art to the history of a group of people.

The museum asked Osceola to share her unique perspective as a former director of a Tribal museum for the opening of the renovated Barton Wing of Native American Art.

“Art is the voice of people who are no longer here to tell their story,” said Osceola, former Ah-Tah-Thi-Ki Museum director. “Three hundred years from now people will see this art and try to interpret a story from it.”

To demonstrate how art helps modern society decipher the history and culture of people, Osceola spoke about objets d’art from the Second Seminole War, when people fled deep into the Everglades from advancing American troops.

She also cited Hopi pottery objects on display at the Lowe Art Museum, which to the creators were merely practical objects.

“What we call art today, they called bowls,” Osceola said. “Those utilitarian items tell a story about how much care went into their ceremonial and everyday items. But they put just as much value and time into things they sold for the tourist trade. It’s all about the story within.”

Through her work at the Tribe’s Museum, Osceola knows firsthand the challenge of illustrating the rich history and culture of a Tribe through its art. But Osceola said museums exist to tell stories, and Tribal museums give Tribes a voice.

“We are telling our own story and telling it our own way today,” she said. “The stories we tell are those we want you to know. The stories we tell through art today are much different than the ones from earlier, but they are all rooted in our heritage.”

Osceola also spoke on the renaissance of Seminole art today.

“Little girls are sewing again,” she said. “Making patchwork is about human interaction and passing of stories. It tells us who we are. Art is a knowledge-seeking journey and every piece has a story.”