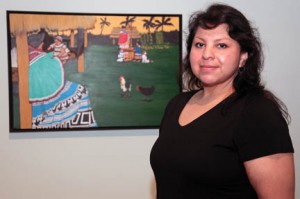 MIAMI — Erica Marie Deitz joined an elite group of Native American artists recently when the Lowe Art Museum at the University of Miami purchased one of her paintings for permanent display in the Barton Wing of Native American Art. The museum held an opening March 7 for the redesigned wing, which features 115 examples of contemporary and historic art of the Americas – especially the art of Native North America.

Seminole Village I – Deitz’s 29-by-33-inch acrylic on canvas painting – hangs prominently on the wall near other Seminole art, including patchwork clothing from the 1930s, sashes from the mid-19th century, modern sweetgrass baskets and a painting of Seminole chief Julcee-Mathla from 1826.

“The Lowe was looking for a contemporary piece that depicted the Seminole Tribe,” said Deitz, a member of the Seminole, Winnebago and Ojibway Tribes. “They chose one of a Seminole camp. I made the painting to give my children a picture to look at so they have an idea of what it was like to live back then.”

Deitz has always appreciated art. As a 3-year-old she asked her aunt Bonnie Motlow to draw pictures for her, but Deitz said she soon started drawing them herself. She has created art ever since.

Growing up in an artistic family has helped hone her creativity; her parents, Jo Motlow North and Robert North, met while students at the Institute of American Indian Arts in Santa Fe, N.M., and her grandmothers were both artists.

Deitz had her first one woman show at Walker Elementary School in Fort Lauderdale at age 10.

“When it came to art, it wasn’t a hobby,” Deitz said. “It was something I did as if someone was to breathe or eat. It was innate; it was part of who I was.”

Although she enrolled in advanced art classes at Nova High School in Davie, Deitz never pursued art school. Instead, she took criminal justice classes at Broward Community College and planned for a career as a criminal sketch artist. School and art took a back seat, however, when she married her husband, Bruce Deitz, and had three children, but she always managed to create pieces for Tribal Fair competitions. When the family moved to Eagle, Idaho in 2004, she devoted more time to her art.

“I was getting nostalgic for my Indian heritage and started putting the traditions into my paintings,” Deitz said. “You have to move away from something to realize what’s important and give you something to focus on.”

Robert North not only encourages his daughter but he also promotes her and other Native American artists through his business, Cloud North Productions.

“We saw the talent in her early on and encouraged her,” North said at the Lowe opening. “We knew it would come to this and so much more when the time was right. I have the honor of representing her, which is pretty close to perfect.”

Deitz spends a lot of time in her in-home studio where she works in various mediums; she paints and draws, sews patchwork and plans to learn clay sculpting. She aspires to increase her visibility nationally and internationally by competing and showing her work in galleries with non-Native American artists. As a child, she entered and won medals in international competitions and wants to again.

“The whole idea is to immerse yourself in art itself; you never know what will interest you,” she said. “You have to make goals for yourself or it goes on the back burner. You have to challenge yourself or you’ll never expand as an artist.”

“We told our children that there is nothing stopping you, but you really do have to think outside of the box,” North said. “Don’t let people define you. Erica does what she really enjoys; it’s all about her ability to express herself.”

Deitz’s philosophy on art and life is simple.

“Believe in your talent and surround yourself with positive people,” she said.