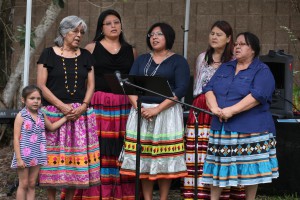 BIG CYPRESS — It made sense that the first sounds at a reception to welcome the newest Ah-Tah-Thi-Ki Museum exhibit – “To Sing as a Group: Multiple Voices of Seminole Music” – were Creek spirituals sung by elders who carry the wisdom of the past into the present.

“God the Creator gave us our voice that we could sing with our mouths,” said Pastor Matt Tiger, of First Indian Baptist Church of Brighton before he and Rusty Powell uttered the hymns like blessings at the March 15 event.

Opened to the public weeks earlier, the show features contemporary Seminole musicians who have incorporated historic Native roots into many musical genres, including folk, country, rap and rock.

Other featured artists are the Rev. Paul “Cowbone” Buster, Savage Twins and The Osceola Brothers Band.

Curator Rebecca Fell, during the recent reception, hosted free tours of the exhibit and an outdoor live music lineup with Tiger and Powell, Savage Twins, flautist Ollie Wareham and the Native Voices choir from All Family Ministries in Brighton.

“I hope we’ve made something you can be proud of,” Fell said to an audience of about 75 who gathered at chickees and a makeshift stage.

“We never meant to be a traveling group but now all of our children know the songs, and we believe that we have another generation of voices coming up,” Gopher said.

Hollywood Reservation’s Huston “Rocket” Osceola and Brandtley Osceola, of the rap duo Savage Twins, performed in-your-face lyrics to illustrate a young boy’s rise from the gritty streets of an urban reservation to manhood and a life that honors his ancestors.

“We had a tough time growing up around alcohol and drug temptation. Our message is that you don’t have to go down that road,” Huston Osceola said. “We never thought we’d be in a museum, ever. Now, it’s our job to make music and be the inspiration.”

A solo flute instrumental by Ollie Wareham transported the audience to a state of serenity.

“Not all voices speak with words,” Fell said.

The Rev. Paul “Cowbone” Buster, of the long popular Cowbone Band, explained how his love for music was inspired by his father, Junior Buster, who was an avid Grand Ole Opry fan. Often, Buster would listen in when his father and Jimmy Roberts would hold jazz sessions under a huge oak tree on the Big Cypress Reservation. His mother, Mary Annie Osceola Buster, bought him his first guitar from a grocery store in LaBelle for less than $1.50 when the family rode into town in the bed of pickup truck.

“On the way home I could see the old clock tower in the distance. I took that guitar and it wasn’t even tuned but I started picking a song,” Buster said. “Music’s always been a part of our lives. It’s always been good to us.”

Many tourists who attended were mesmerized by the music.

Snowbirds Al and Nancy Scaia, of Salisbury, Conn., who are Ah-Tah-Thi-Ki Museum members, agreed that the event gave “in-depth meaning and enlightenment” to facts they learned from the exhibit alone.

“To see the musicians, especially the younger ones, come out and perform and then talk about their connections is priceless,” Al Scaia said. “They are living the music, not just mimicking it.”