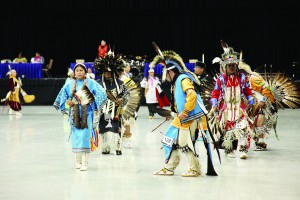 HOLLYWOOD — The Seminole Okalee Indian Village hosted their second annual Pow-Wow from May 11-13 in Hollywood. The three-day event included wildlife shows, alligator wrestling, pow-wow dance contests and vendors from around the nation.

“It was a great time for everyone to learn other Native American cultures,” Okalee Village general manager Jennifer “Ebo” Osceola said.

Grand Entry opened each day with an invocation at Hard Rock Live. Then, Seminole Tribal member Stephen Bowers led the Color Guard, and the dignitaries, dancers and royalty from across the country followed.

For the pow-wow dance contest, Native American Tribes including the Seminoles, Cherokee, Cree, Lakota, Oneida, Chippewa, Comanche and Kiowa competed. Men were judged in Traditional, Grass and Fancy categories, and women were judged in Traditional, Jingle and Fancy Shawl categories. Southern Drums from Rose Hill and Northern Drums from Mandaree gave the dancers their beats.

Osceola said she was happy to see more dancers come out to compete than last year. Also, about 35 vendors set up booths to sell their handmade crafts.

“When you do something, it gets bigger and better every year,” she said.

The Osceola Brothers Band also performed, adding their talent and rock-‘n’-roll tunes to the mix.

Bringing nail-biting excitement to the weekend was the second-ever Freestyle Alligator Wrestling Competitions (FAWC) show, held at 8 p.m. on Friday and Saturday at the Okalee Indian Village amphitheater.

FAWC was founded by veteran alligator wrestlers James Holt, David Weathers, Ian Tyson and Clinton Holt to promote alligator wrestling on a professional level, according to their website.

At the media event previewing the show, Clinton Holt attempted the head trick for the first time since February 2011, when his head got caught in alligator Houdini’s teeth while performing the trick during a show in Brighton.

“The turnout was really, really good and the show was spectacular,” James Holt said. “The sport is growing by leaps and bounds every time we put on a competition.”

About 500 people attended the show on Friday and about 750 came on Saturday, he said.