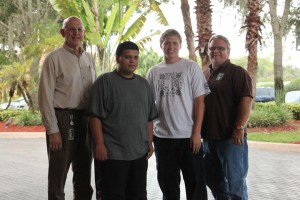 A summer job introduces students to the adult working world. This summer, 62 Tribal high school and college students worked for the Tribe and learned firsthand what it means to be part of a professional organization.

For more than five years, the Education Department’s Summer Work Experience Program (SWEP) has given students ages 14-24 the opportunity to work in nearly every department within the Tribe. Like any new employee, SWEP participants go through training first and then get down to business, receiving a paycheck as well.

“Students always get placed,” said Marie Dufour-Bonville, adult vocational administrator. “They get two months of work, which is a great college application or resume builder. The program also provides them with another adult they can use to polish off an application or resume. It is a good way to make a more well-rounded student.”

Education is the first priority, so students need maintain at least a 2.0 GPA to participate. After the program ends, they return to school.

“I’ve seen real growth in the students over the years,” Dufour-Bonville said. “Some started in the Recreation Department and moved into the Councilmen’s, Treasurer’s or other government-related offices, as well as IT, Environmental Resources and more.”

Janet Smith, of Brighton, worked in the Education Department at Pemayetv Emahakv Charter School and at the Arts and Crafts Center.

“It gave me a little bit of insight on the different departments we have on the rez and how they contribute to the community,” said Smith, 17, a senior at Okeechobee High School. “It helped me learn how to work with other people and become part of a team that works together to get a job done.”

Haden Littlebear, 16, has a passion for computers, so he worked in the IT Department, where he helped the technicians resolve problems in a variety of departments.

“Wherever someone had a problem, I helped out,” said Littlebear, of Hollywood, a sophomore at American Heritage. “I learned how to add a printer server to a networked computer. It was also good to get to know the people you work with. I don’t usually go out much, so this job also gave me people experience.”

Sharka Frank, 14, worked in the Hollywood Preschool assisting teachers with daily duties, supervising small groups of children while the teachers were busy and taking care of the children’s needs during mealtime.

“It was so much fun,” said Frank, a freshman at Divine Academy. “It made me feel really happy. I would recommend it to everyone.”

SWEP provides students the chance to experience jobs they may want in the future and learn what it takes academically to qualify for the positions. They also get to see first-hand what the Tribe does for its members and how it accomplishes its mission.

Steven Luff, project manager of the Big Cypress Environmental Resource Management Department, made sure his participants had a chance to learn about scientific methods used in the field. They learned how to take a sample to test water quality, search for wildlife, identify native and exotic plants, and inspect sprinklers around the reservation.

“They chose this department because they wanted to learn about environmental issues,” Luff said. “We showed them what it was like to work in the environmental world.”

John McInturff, 15, liked working for Luff, but he learned an unexpected lesson.

“It was more hands-on, which I like,” said McInturff, a sophomore at The Sagemont School. “But I learned the Environmental (Resource Management) Department is not for me, and I don’t want to make a life there.”

Jesse Mitchell, 17, worked in the Big Cypress Housing Department, where his father, Jim Mitchell, is the Housing maintenance foreman.

“We had him work with the technicians in all the trades,” Jim said. “He did dry wall, painting, cleaning, air conditioning and electrical work. We had him in the field every day.”

“I worked with all the maintenance people and got a lot of experience,” said Jesse, a senior at American Heritage. 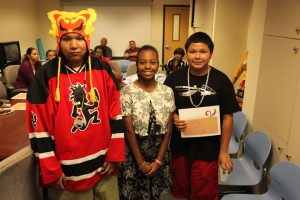 “I also got a better work ethic and learned you can’t sleep in; you have to get up every day.”

In addition to getting practical experience, many students earned a paycheck for the first time. Derick Toho, 14, worked in the Hollywood Recreation Department helping with the kids attending camp.

“It felt great to get my first paycheck,” said Toho, a freshman at American Heritage. “I went to the mall and spent it on a pair of shoes.”
Watching the kids was easy for Toho, who comes from a large family, but he learned larger lessons during SWEP.

“You have to work to get your money,” he said. “You actually have to work at work. It feels good. It shows you are responsible.”

The Hollywood Recreation Department had five participants work as additional chaperones and assist younger campers during the department’s day camp. Richard Clark, Recreation supervisor, was in charge of the SWEP students.

“We took them by the hand and showed them how to work (and) take initiative and what a boss expects,” Clark said. “It’s a good program for them.”

Applications are accepted starting in May, and placements in departments are on a first-come, first-serve basis. Dufour-Bonville recommends turning applications in early to ensure students get their preferred departments. The program runs from mid-June to mid-August.

“The whole experience was great,” Littlebear said. “There was never a day I felt bored. It’s like that old saying, ‘If you do something you love, you will never work a day in your life.’ That’s what this was for me. It was fun.”