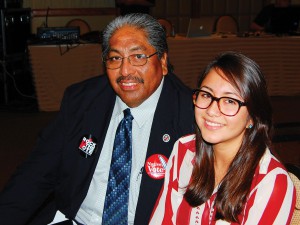 Every summer, the national organization holds a conference and hosts hundreds of Tribes, youth councils and Native youth across the country under one roof with one purpose: uniting the diversity and standing as one.

UNITY has helped guide American Indian and Alaskan youth for more than 35 years, and they welcomed the Seminole Tribe of Florida Youth Council in July for the second time.

“Meeting other Natives through UNITY is a benefit to us,” 18-year-old high school graduate and Youth Council member Jason Melton said. “Our Tribe is a bit more isolated than it should be, and we should try to expand our horizons.”

Ragan Osceola, an American Heritage graduate from Big Cypress, also joined the Youth Council and UNITY Conference for the first time. She will attend Southeastern University in Lakeland, pursuing a bachelor’s degree in elementary education.

Around 1,500 Native Americans from all over the country packed the Sheraton Phoenix Downtown Hotel, ready to unite and make a difference.

The national UNITY Conference began with a spiritual component, the UNITY fire. Each youth council – around 150 councils attended – gathered around the fire-keepers, SleepyEye LaFramboise and Warren Skye, to light the UNITY fire, which burned throughout the conference. It signified the first gathering of the Tribes for the weekend.

“Standing shoulder by shoulder watching a sacred fire being lit from scratch by SleepyEye and his grandfather, Skye, was amazing,” said Cypress Billie, a 16-year-old senior from Big Cypress who attends Admiral Farragut Academy. “Watching the fire being lit the traditional way gave me hope that the old ways will always survive due to our people passing our culture down to each generation to come through language and through the blood in our veins.”

The ceremony was followed by the UNITY drums, and then the conference set into motion. It lasted from the fire ceremony on July 6 to a bittersweet friendship circle goodbye on July 10.

“The conference gives youth the opportunity to meet other youth,” said LaFramboise, a member of UNITY for 17 years and lead speaker/fire-keeper at the fire ceremony. “They can utilize their lives and get involved in UNITY, getting exposed to issues and preserving culture.”

For Marissa Osceola, who attends the Community School of Naples, the experience furthered her appreciation of the Seminole Youth Council.

“The Youth Council has been an awesome experience so far. It has reached out to many people,” she said. “From our food drives to toy drives and even just the encouragements that our Tribal kids are getting from it build better community connections.”

The weekend continued with workshops, meetings, area caucus conferences, special guest speakers and a cultural exchange. Faces like Gov. Gregory Mendoza, of Arizona’s Gila River Indian Community and on the Council of Trustees for UNITY; economist and Native rights activist Winona LaDuke; Faith the two-legged dog; and even Litefoot (Gary Paul Davis from The Indian in the Cupboard) were present in the general session as special guests to inspire and touch the lives of the youth.

Billie performed Try and Try Again, a song originally performed by his father, Chairman James E. Billie, during general sessions to encourage youth to stay loyal to their dreams and pursuits.

Each special guest speaker, meeting or workshop was geared toward supporting and motivating the youth and was done entirely by successful Native American people. There were even basketball tournaments and morning walks to support physical health.

“The conference is eye opening. It’s really wonderful to see all the Native youth together,” said Miss Indian Nations Shanoa Pinkham, of the Yakama Nation Youth Council. “We have a lot to learn from each other; it’s all about giving back.”

Tyler Tigertail, a 17-year-old from Big Cypress, is a new Youth Council and UNITY member. He plays football for American Heritage, where he is a senior, and wishes to pursue a future with the Marine Corps.

Also during the conference, on behalf of Native youth voting, Ned Norris Jr., Chairman of Tohono O’odham Nation and the National Conference of American Indians’ vice president for the western region, spoke to UNITY about the importance of indigenous votes and encouraged youth councils to participate in federal elections.

“Native vote has been a critical part in what we do,” Norris said. “Exchanging issues and different things affecting communities [between Native youth] is also an opportunity to understand one another and help one’s own Tribe.”

A cultural exchange exposed the Seminole Youth Council to different Tribes. It included presentations of traditional dances and songs from the Apache Nations and the Navajo Nations, which welcomed the visitors to their land, Arizona, and included more than a hundred Tribes providing cultural clothing, jewelry, dances and songs.

“Our Tribal Youth Council was prepared to participate by dressing in full-on regalia,” Marissa Osceola said.

Other Seminole youth who participated were Leauna Billie, a 10th-grade student at The Sagemont School, who resides in Big Cypress; Marsha Osceola, a ninth-grade student at American Heritage, who also resides in Big Cypress; and Alexis Aguilar, from the Immokalee Reservation, who has served on the Youth Council for two years and who has attended UNITY twice.

The Seminole Youth Council was also involved in the Southeast Area Caucus, which consisted of only two states. Each region of the nation was broken into an area caucus, such as the Great Plains, the Midwest, Northeast, etc.

Two representatives from each Youth Council were then permitted, after a thorough discussion between the caucus’s youth councils, to vote on an amendment to the UNITY Constitution. This vote affected the previous installation of the National UNITY Executive Committee, which held six members at large, two opposing-gender presidents, a vice president and a secretary.

In order to disperse the voice of UNITY toward every caucus more evenly, the Seminole Youth Council representatives voted for a 12-member committee, as opposed to the previous 10 members or a suggested 14 members. This way, a representative from each caucus would hold a position in the committee, which gives each region a fair chance to have their voice heard.

“Just being [at UNITY] is a great representation for our Tribe and allows the East Coast a stronger voice in the UNITY Council,” Marissa Osceola said.

Though many Tribes affiliated with UNITY reside on the West Coast or Midwest, the East will now be heard as clearly as the majority.
“It was a really great experience for everyone,” Marissa Osceola said. “Not only did we get to mingle with people from different Tribes across the nation, but we also received an educational benefit by participating in the workshops.”

The Seminole Tribe of Florida Youth Council hopes to have more young Tribal members involved with the Youth Council and UNITY alike for years to come.

Through participation, Tribal members can develop beyond the community and grow into the greater Indian Nation as a representative of Native America.

Like Miss Indian Nations said, “Wherever you go, your culture goes with you.”

Next year’s UNITY conference is set to take place in Los Angeles.

Braudie Blais-Billie, a 19-year-old high school graduate from the Hollywood Reservation, received her diploma from Pine Crest School and will attend Columbia University in New York City this fall. This is her second year both as a member of the Youth Council and as a UNITY conference attendee.