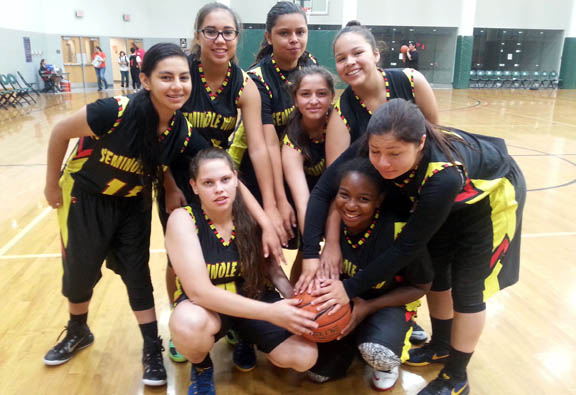 The Native American Youth Organization (NAYO) Basketball Tournament concluded in April, but a few Seminole teams are still playing together.

Preston Baker, coach of two boys teams, said one reason to keep the squads together is to give the players opportunities to develop more unity and increase their chances in future NAYO tournaments.

In that respect, it was mission accomplished for Seminole teams Lil Hustlers, Florida Natives and Seminole Wind during a Memorial Day weekend youth tournament in Pensacola.

“They bonded good up there,” Baker said.

“They struggled on defense, but offensively they were on,” coach Baker said.

Indications point to a championship win in the future for the Seminole players. Two weeks before the Pensacola tournament, Team Hustlers, which featured some of the Lil Hustlers players as well as Trace Wilcox, finished second in the SpringFest Shootout at Rollins College in Winter Park.

“They’re getting closer to first place,” said Baker, who is assisted by coach Steve Frost.

On the girls side in Pensacola, Seminole Wind, whose roster included eighth- and ninth-graders, finished fourth with the youngest team in the tournament. The squad consisted of BayRay Boromei, Alicia Fudge, Burgundy Pierce, Talia Rodriguez, Julia Smith, Alaina Sweat, Caroline Sweat and Luzana Venzor. Seminole Wind squared off against teams from Alabama, Louisiana and Mississippi.

“They held their own. Their defense was good,” said Baker, who said the teams plan to play in a few more tournaments in the coming months.