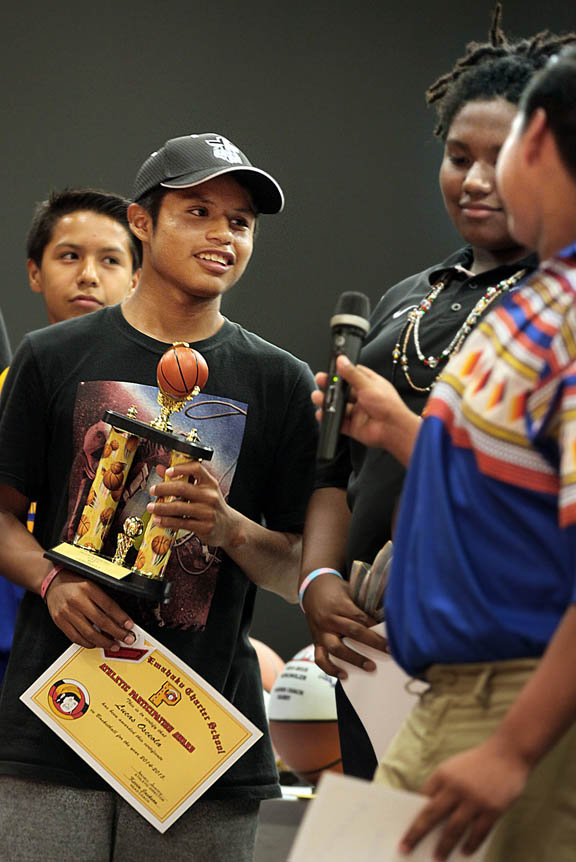 BRIGHTON — Student-athletes with good sportsmanship, great attitudes and the best examples of Seminole spirit were rewarded with cheers and trophies in the new gymnasium at the Pemayetv Emahakv Charter School athletic banquet.

“You are a reflection of what is wonderful about our athletes, coaches and teachers,” said the Brighton Reservation school’s athletic director Aaron Suarez to nearly 30 students at the May 27 event.

Teachers and staff served up hearty plates of fried chicken, green beans, macaroni and cheese, and cake to mark the evening of celebration in honor of the school’s volleyball, basketball, softball and baseball teams.

Head coaches and assistant coaches presented individual awards for players who represented the best in categories that included most valuable player, offensive and defensive players of the year, most improved and rookie of the year. Seminole Awards went to a student from each team who went above and beyond the rest in exhibiting warrior strength of character, endurance and team spirit.

“Our Seminole Award goes to the player who gives all; you tell him to go, he goes; you tell him to stay in the game and he fights for the team,” basketball assistant coach Harry Tewksbury said before he called winner Kamani Smith to the stage.

Kamani reciprocated by reading a poem for Tewksbury and basketball head coach Kevin Jackson that he wrote for the entire team.

Some teams had more to celebrate in terms of victories than others. The girls volleyball team, under head coach Kim Jackson and assistant coach Pam Matthews, went undefeated. The MVP award went to Raeley Matthews, who racked up 54 kills, 17 aces and 2 blocks during the season.

The loudest applause went to the 10 students who received Scholar Athlete patches for earning grade point averages of 3.5 and higher.

Principal Brian Greseth praised the group who faced opponents fearlessly though the odds, year after year, are stacked against them. PECS has only 78 middle school students while most of its opponents feature far larger enrollments.

Sometimes, as with the baseball team this year, opposing players were from high school junior varsity teams who towered over PECS players and who were already growing beards.

“But we still go out to Okeechobee, Belle Glade and other schools and whip it up year after year. That only happens because we have dedicated parents, students and the best coaches,” Greseth said. “You never hear our players say, ‘No, we can’t win.’ They only say, ‘Let’s go get ’em,’ because they have the heart, the will, the gusto to go out there not just as a winning team but as a team that never quits.”