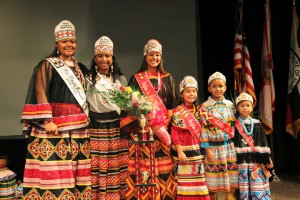 BRIGHTON — Twenty-one young girls and boys competed for the honor to represent the Brighton Reservation as Seminole royalty on May 24. In addition to the customary titles of Jr. Miss and Miss Brighton, Little Mr. and Miss were added to the competition.

“During the planning stages for this year’s pageant, committee member Theresa Nunez suggested that the pageant bring back [the] Little Mr. and Little Miss contest,” head coordinator Salina Dorgan said.

The Brighton Princess Committee felt it would be a great opportunity to help the little ones improve their stage presence.

“The little kids will get to experience speaking, and it will help them prepare for the Little Mr. and Miss Seminole Pageant held in Hollywood,” Dorgan said.

With the amount of talent at the pageant and the amount of hard work put into preparing for it by each contestant, declaring the winners was a hard decision for the judges, who were chosen from the surrounding communities.

“I’m very excited and happy for [Lexi] to win,” her mother, Laverne Thomas, said. “She has been working very hard to remember what she is going to do for the pageant.”

Maria Billie, Aubee’s mother, said she was happy for her daughter and for all of her hard work paying off.

“She practiced every day even though she didn’t like to,” she said.

All winners will serve a one-year reign representing the Tribe and the Brighton community in local parades including Chalo Nitka, Speckled Perch and Labor Day. They will also have the opportunity to represent the Brighton community at their annual Field Day festivities, and some may even be chosen to attend the Gathering of Nations Pow-Wow in Albuquerque, N.M.

Dorgan expressed her gratitude to all those who helped make the event a night to remember for the contestants.

“I would like to thank all the committee members, including Theresa Nunez, Joanne Osceola, Jo Jumper, Rita McCabe, Stacy Jones and Brighton Council Rep. Andrew Bowers (Jr.),” she said. “It was a success. Hopefully next year we will have more participation.”