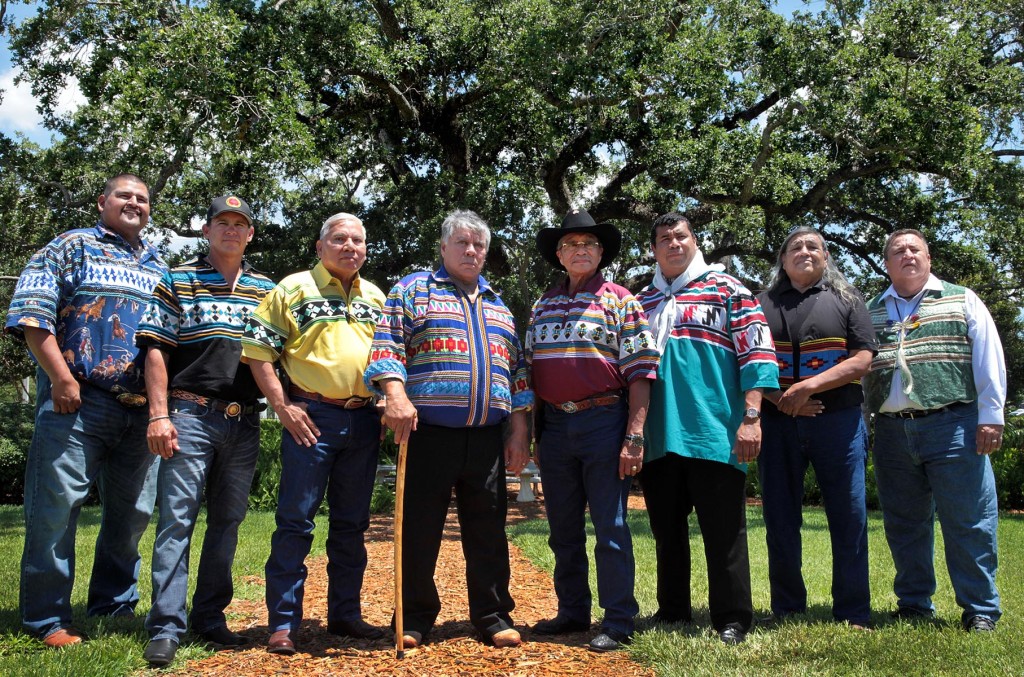 HOLLYWOOD — Witnessed by a crowd of nearly 500 spectators, the Tribe’s newly elected leadership was sworn in June 1 during a reverent and proud inauguration ceremony at the Hollywood Reservation.

“I pray for the leaders that stand before us that they will lead with knowledge and wisdom,” said the Rev. Paul Buster following an invocation in Mikasuki by medicine man Bobby Henry, of the Tampa Reservation.

The event marked an incoming era of possibilities with two prolific Tribal leaders at the helm.

Chairman James E. Billie was sworn in for a second consecutive term. Mitchell Cypress, the Tribe’s newly elected President, resumed a leading role in Tribal government after a four-year break.

Chairman Billie’s long and storied career began when he was first elected Chairman in 1979. He served 22 years building the Tribe’s sovereignty and self-determination through gaming before he took a “vacation” from office in 2001 amid controversy. In 2011, he was reelected in a landslide win.

Chairman Billie is credited for establishing Native American gaming throughout Indian Country when he opened the first high stakes bingo hall in 1979. By 2011, Seminole Gaming covered operations in Immokalee, Tampa, Brighton, Hollywood, Big Cypress and Coconut Creek. Meanwhile, the Tribe was instrumental for the United States government’s subsequent creation of the Indian Gaming Regulatory Act (IGRA) and then for the 1996 Supreme Court decision that, through IGRA, consented to substantial bargaining powers of Tribes with states over casino style gaming.

During his acceptance speech, Chairman Billie recalled his introduction to bingo in early 1979 while visiting a Native American reservation in Oklahoma.

“There was a bunch of numbers … and someone would yell out, ‘Bingo!’ and what they won was a can of beans or sardines or something like that,” Chairman Billie said. “Then somebody gave the idea that we could do bingo here and the prize money could be bigger … With the help of several people in the state of Florida, and with attorneys, we achieved the level we are at today.”

Cypress served in office from 1999 through 2011 first as President and then as Chairman. During his tenure, he helped strike the historic Hard Rock International deal that further propelled the Tribe toward financial prosperity. The global corporation now boasts more than 175 venues in 55 countries.

“It feels good to be back in the saddle again,” President Cypress said. “The priority will be to work with the state and getting Council and the Board to work together and set goals for the next four years.”

The oaths of office for the Tribe’s Chairman, President, three Councilmen and three Board Representatives were administered on the stage decked with Seminole, American and Florida flags by Bureau of Indian Affairs Acting Eastern Regional Director Johnna Blackhair.

True to reservation demographics, Hollywood residents accounted for the most votes for the Chairman and President positions but not by significant numbers. For Chairman, Hollywood residents cast 253 votes, while Brighton cast 243 votes and Big Cypress, 227. Non-resident, resident absentee and non-resident absentee voters accounted for 265 votes in the Chairman race.

Chairman Billie retained his position with 44.64 percent of the vote. In the vote for President, Cypress won with a nearly 22 percent margin.

The election night announcement of Big Cypress Councilman by Tribal Secretary LaVonne Kippenberger proved to be a major upset among those gathered at Tribe Headquarters: Cicero Osceola ousted Mondo Tiger by capturing 57 percent of the vote.

Board and Council members offered positive expectations for coming years during the inauguration.

“Everyone up here has proven that when we work together, we can do good things,” Rep. Frank said. “And we have a lot of potential. We can get a lot more done.”

Rep. Howard agreed: “We have one Chief, but it takes the whole Tribe … I’m going to say this: We’ll pull together. We have to be head to head, whether we’re one Clan, no Clan … we’re all one – we’re all the same Tribe.”

Children from Pemayetv Emahakv Charter School in Brighton recited the Seminole Pledge in Creek followed by children from Ahfachkee School in Big Cypress who delivered the pledge in Mikasuki.

Chairman Billie, President Cypress and all the newly sworn-in officials pledged to continue building the Tribe’s communities and businesses.

“We have a long way to go for the next four years, but we’re going to see a tremendous change for the Tribe for the better. Better than you’ve seen before,” Chairman Billie said.