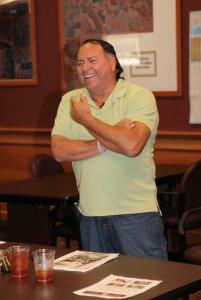 BRIGHTON — When you think of getting older you tend to think of slowing down, retirement, spending time with the grandkids and getting to do all the things you didn’t get to do while younger because of work – like days out on the lake fishing. That’s not the case for 60-year-old Willie Johns of the Brighton Reservation.

“If anything, I feel like I’m picking up speed,” Johns said.

If you’re part of the Seminole Tribe or even a citizen of a surrounding county you probably know or have heard of the name Willie Johns.

A member of the Panther Clan, Johns was born in Okeechobee March 23, 1951 to Arlene Johns. Johns grew up on the Brighton Reservation on a campsite where the water tower stands today.

Johns attended first through sixth grade in Okeechobee before he transferred to Moore Haven and graduated in 1970.

Creek being his first and native language, Johns had to pick up the English language in the classroom.

“We were speaking some English as we got older and then it got really dominate because we were starting to hang out with white kids,” Johns said. “So we adjusted rather quickly.”

After graduating high school Johns traveled to Tifton, Ga. where he attended Abraham Baldwin Agriculture College for two years and earned his associate degree, his “smart farmer’s degree” he joked.

“It was fun, we had a good time,” Johns said about college. “We weren’t babied growing up. We had been to a lot of camps so weren’t prone to being homesick. We fell right in with society and did what they did.”

In 1973 Johns returned to Brighton and got a job with the Tribe working what was then called the bull project, where the Tribe raised their own bulls. Johns only worked there for a couple years before deciding to head back into the classroom.

“I was trying to make a way for myself, so I went back to college,” he said. “I knew I wasn’t getting nowhere with that two-year degree.”

Johns picked up and moved once more to Palm Beach to attend Palm Beach Atlantic University where he received a bachelor’s degree in business administration and finance. He said those were the popular courses people were taking, so he figured that’s what he should do.

He continued south where he moved to Hollywood and became the Seminole Tribe’s education director.

“I worked there for a while, but I never could get settled in Hollywood, so I resigned and went back to cowboying,” Johns said.

Johns belonged outdoors. It was what he knew, so he packed up and moved back to Brighton in the early ’80s where he met and married his wife, Mary, who he was married to for 30 years.

He stayed outdoors ranching and working cows until he went to work for the State, on their brucellosis program, a disease carried by cattle that causes them to abort.

In the late ’90s Johns returned to the Tribe as the education director again, only this time remaining in Brighton. In the evenings Johns attended night classes to earn a history degree.

“I’ve always wanted to study history,” he said. “It’s kind of funny because I wanted to learn more about my people, but to really learn history in general, I had to take a lot of courses in European history and study other kinds of people.”

Johns admitted that one reason he wanted the history degree was because it gave him the opportunity to attend law school if he ever leaned that way.

After completing his history degree and finally feeling like he had everything in order, his life changed forever.

Johns discovered he had Leukemia.

“It was really by accident or might have even been a prayer really,” Johns said.

He was trying to lose weight and get into shape, so he visited a weight-loss doctor and had routine blood work taken in order to be accepted into the program. When his blood work came back, the doctor told him he needed to consult with another doctor because he was not a good candidate for their program in his condition.

“I was thinking what, what is this guy talking about?” Johns said.

He followed up with doctors at the clinic and then a hematologist in Sebring where doctors confirmed he had Chronic Lymphoma.

In the early 2000s he began chemotherapy that lasted for eight months. Each month he spent a day in the hospital where he was administered an IV drip.

“The doctors kept telling me, ‘We’ll treat it until you die,’ so I always thought I was going to die,” Johns said. “You get those thoughts in your head, but that’s just pity talk.”

While undergoing treatment Johns worked for the Culture Department in Brighton, which allowed him to focus on his recovery and also do a few talks and some research.

Johns beat the cancer and was offered the director position for the Culture Department but turned it down to join the museum in 2006.

“It was an in for me to do what I wanted and studied,” Johns said.

As the community outreach coordinator for Brighton, Johns travels around speaking on the topic that engaged him to go back to school: Seminole Indians.

Johns works with museums across the country, including the National Museum of the American Indian in Washington, D.C., where he writes articles on Seminole topics such as stomp dance and warfare. He is a member of numerous organizations, including the Okeechobee Battle Friends, the Seminole War Society and the Florida Cattleman’s Association.

You never know where he is going to be, but you’re definitely not going to find him in his office. One day he may be in Naples doing a talk for Kiwanis, another he may be in St. Augustine where he is an adviser for the 450-year celebration and another he might be in Cherokee, N.C. helping start up their Corn Dance.

“I just like to be active,” he said. “I like to be involved and always moving, never stale.”

He explained how the Seminoles are the central theme of his doings, that they are all he knows and that it’s his business to know as much as he can about his people.

“I’m about education and I believe in education and I like teaching others,” Johns said. “If we don’t teach it, no one else will. I think it’s pretty cool to tell a story that people haven’t heard and they look at you and think, ‘He knows that.’”

Johns also stays busy as a member of the Seminole Tribal Court, with hopes to one day become a judge for his people, fulfilling his dream of going to law school. He has also become an entrepreneur with a barbecue sauce company, called Cow Creek, which he started with his cousin Alex Johns.

Asked about slowing down and taking time off, Johns said absolutely not.

“As long as I’m productive, I want to keep working. Our people don’t have that many folks my age that want to continue to go on, and we need those folks in the workforce to be mentors and to guide the little pups.”

Johns said he has no regrets and has enjoyed every part of his life and his accomplishments.

“When I think I’m a having a regret moment I usually shake it off,” he said. “Everything happens for a reason. It’s not for me to decide what’s what. So, would I do it over? Yes, in a heart beat, but I wouldn’t change anything.”