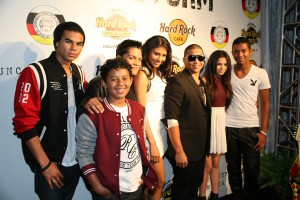 HOLLYWOOD — It was Saturday, Sept. 17 in a part of the city that never sleeps. Spotlights waved through the evening sky. The beams disappeared into the heavy white night clouds hanging low above the blinking lumina-scape of the Seminole Hard Rock Hotel & Casino. Below, just west of the water dancing Paradise fountain show, a murmuring crowd gathered. In front of the intimate Paradise Live theatre, excited eyes darted with abandon, watching for celebrities.

In fact, it WAS a “Celebrity Watch” party, hosted by the two young men whose images were emblazoned on the marquee, Seminole Tribe hip hop singer/songwriters Doc and Spencer Battiest. The next great American Indian idols were throwing a party to celebrate a whole “storm” of thunderous events now happening in their lives:

● The official debut of the Battiest brothers’ first professional music video “The Storm,” a moving, colorful Seminole Indian-themed blockbuster video accompaniment to the brothers’ much-acclaimed single of the same name. “The Seminole Tribe were there for us in all aspects of this video. They trusted us to make a good impression,” said Spencer, who celebrated his 21st birthday that same night. “I hope we did them proud.”

● Three nominations for 2011 Native American Music Awards. The prestigious “Nammys” will be given out Oct. 7 at the Seneca Niagara Hotel & Casino in Niagara Falls, N.Y. Doc and Spencer are finalists for Best Hip Hop Recording, Song Single of the Year and Debut Artist (previously won in 1999 by Seminole Chairman James E. Billie). “Man, if we win that one, I’ll feel like it has really all come around,” said Doc, whose given name is Zachary.

● A visit by celebrity actors Kiowa (shapeshifter) Gordon and Chaske (werewolf) Spencer from the Twilight Saga movie series, and Genevieve, Randy, Jaffar and Jermajesty Jackson (the late Michael Jackson’s niece and nephews) to participate in a red carpet-style entrance. They all signed guitars, autographs and T-shirts and posed with the Battiest brothers for photos that launched like skyrockets through the Internet. “I really like those guys. They are great,” said Genevieve, also a singer. “I was really moved by the video. How beautiful!”

● The launch of Unconquered Media, a Hollywood entertainment production company owned by Spencer and Doc.

“This was our biggest night. Everything, EV-er-ry-thing was goin’ through my head.” – Zachary “Doc” Battiest

Cameras flashed, TV reporters stuck out microphones and cameramen kept yelling out, “Over here, over here!” Blue fruit juice, roasted lamb chops and crab cakes were everywhere. Proud dad, Henry “Junior” Battiest, cracked jokes as master of ceremonies; when the crowd moaned after one bad joke, he came right back: “I can’t get fired from this because I’m Dad!” Tribal leaders in attendance included Brighton Board Rep. Larry Howard, Tribal President Tony Sanchez Jr. and Chairman James E. Billie, whose voice can be heard at the beginning of “The Storm” video, speaking in Mikasuki dialect. Each leader took the stage to pay tribute to the brothers and expressed pride in their work honoring the Tribe. “You have come a long long way,” Howard said. “The sky is the limit!”

“When we finished the video, I brought it to James Billie for his review,” Spencer said. “He kept it awhile and told me he had watched it 40 times. He was looking for a mistake, something we did wrong, but he finally brought it back and said he couldn’t find anything wrong. He said to go with it, so we did!”

“He’s right,” said the Chairman, who in his other career as musical artist Chief Jim Billie, also won a Living Legend Nammy at the 1999 Awards. “Our Tribe’s young men, the Battiest brothers, show what hard work and dedication can achieve. I’m happy that the Seminole Tribe, along with Seminole Hard Rock Hotel & Casino, believe in the future of our young Tribal men”

The video was preceded by a 40-minute concert presenting Spencer front and center as lead singer, accompanied by singers Kenny Scott and Ebony Whitfield with Doc providing harmonies, rhythm and percussion on the turntables. “We brought out a bunch of new songs. The performance had been on my mind all day,” said Doc, who said he changed his name to honor his grandfather, pianist extraordinaire Henry Battiest Sr., whose nickname was Doc.

“But the video, that was special. No one had seen it until that very night. You know, when it’s your brain child, when you put your heart and soul into your craft, you want some recognition, you want the audience to appreciate what you are doing, especially our members of the Seminole Tribe, so many of whom were there that night!”

Judd (Kiowa and Mississippi Choctaw) briefly addressed the audience: “I am so happy to be here among you beautiful Seminole people.”

A standing ovation and rousing applause followed the end of the video. Everyone stood up and cheered: the Jacksons, the Werewolf, the Shapeshifter, the Chairman, the President, all the fancy-dressed folks who followed the invitation’s rule: dress to impress.

Spencer and Doc felt chills down their spines. “I couldn’t believe it,” Doc said. “Everyone’s got Storm fever!”