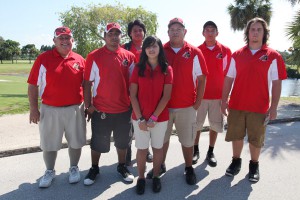 It was Bruce Pratt who made history as the Ahfachkee Warriors first-ever golf head coach last season. But Pratt decided to step down for the program’s second year on the golf circuit, making it possible for Amos Mazzant to take over the helm.

Already, the Ahfachkee Warriors have competed in two golf matches at the Clewiston Golf Course in Clewiston. Ahfachkee faced off against the Clewiston Tigers and the Moore Haven Terriers in their Sept. 1 season opener, followed by a Sept. 15 quad-match with Clewiston, Moore Haven and Immokalee.

With six golfers on their squad, Clewiston (228) defeated Ahfachkee (237) and Moore Haven (297) to take the Sept. 1 tri-meet in Clewiston. Ahfachkee senior golfer Taylor Pratt was the top individual golfer of the 14 total athletes from the three teams, posting a nine-hole score of 47.

“Under Coach Amos, I’ve improved my game a lot,” Pratt said. “I’ve dropped, like, eight strokes off my best score from last year. It felt really good for me to get a score like that. Our coach is very patient with us and he shows our team different ways on how to improve our swings and our putts on the golf course. I feel really good about our team and I think we can win a couple of matches this season.”

“It’s not so much about us winning and losing,” Mazzant said. “The boys played and hit the ball well, but their overall scores did not reflect their efforts and how hard they tried.”

Ahfachkee’s golf team faced off in a dual match with Sagemont on Sept. 20 at Weston Hills Golf Course in Weston. They played two days later (Sept. 22) against Heartland Christian at the Gulf Hammock Golf Course in Sebring.

From there, Ahfachkee played in the Sept. 27 Hendry Country Golf Championship against Clewiston, Moore Haven and LaBelle at Glades Golf Course in LaBelle.

The final two matches of Ahfachkee’s golf season are scheduled for Oct. 6 versus the LaBelle Cowboys and Oct. 13 versus Heartland Christian (Sebring). Both matches will be held at the Clewiston Golf Course.

“Our goal is to simply get better each time,” Mazzant said. “Clewiston’s golf coach, Jack Kemp, told his team to look out for Ahfachkee. He said that our team will be very hard to beat soon. It’s just a tribute to how hard they work. The kids are outstanding and they are dedicated to their craft. I’m so proud of them.”

Big Cypress Tribal Council Rep. Mondo Tiger said he has noticed the improvements made since Mazzant took over the helm just several weeks ago.

“Amos is a big, big plus for us,” Tigers said of Mazzant. “Right off the bat, Ahfachkee finished second in a golf match. That’s something that never happened before in our program. I wish Amos had more time to work with our kids before the season started, but I believe he will really, really turn it around for the kids. Hopefully, by the time we get out of probation, we’ll get somebody to qualify for the district, conference and regional championships at some point.”

All new sports teams, according to FHSAA rules and regulations, are subject to a two-year probationary period before they can join a district and be eligible for postseason play. Ahfachkee’s golf program is scheduled to come off probation as of the 2012 season.